In an effort to keep up with the growing demand for medical cannabis, New Jersey has revised its current regulations and paved the way for licensing of more medical cannabis dispensaries. According to app.com, “The New Jersey Cannabis Regulatory Commission on Friday voted 4 to 1 to issue 10 new licenses for medical marijuana cultivators and four new licenses for vertically integrated businesses, which grow, manufacture and sell medical marijuana at dispensaries.” While more than 200 marijuana businesses applied for licenses, the process was halted due to a lawsuit.

All of these legal maneuvers, combined with a small staff to process licensing, took considerable time, but now it appears New Jersey is on the path to expanded choice for medical marijuana users.

The approval for more dispensaries appears to be justified. Currently, there are only 23 active medical marijuana dispensaries supplied by just 10 certified growers operating in New Jersey. However, app.com reports that “By the state’s own estimates, there should be 26 medical marijuana cultivators and 61 dispensaries to handle that number of patients.” As  CRC Executive Director Jeff Brown noted, “Over two years have passed since we set out on this journey, and the patient population looks dramatically different than it did then. Enrollment shows no signs of abating, and we plan to continue to reduce regulatory barriers. We need to address that need now.”

Part of the problem, ironically, is that even while new people are enrolling in the program, others are dropping out owing to a lack of easy access to quality marijuana products. As Brown put it, “It is easier than ever for patients to come into the program, but patients still face high prices, crowded dispensaries and problems finding the strains they find most effective.” Of course, the reality is that Brown is hinting at is that when faced with these access issues, people will often turn to illegal marijuana sales. 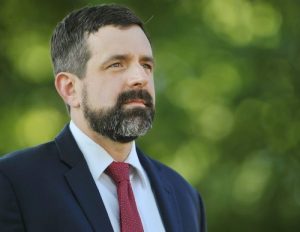 Cannabis Regulatory Commission (CRC) Executive Director Jeff Brown
Source: Patti Sapone | For NJ Cannabis InsiderThat’s because despite the legalization of weed in New Jersey, becoming a legal dispenser of marijuana is complicated and expensive, a condition that makes it extremely difficult for non-corporate entities to get into the game. As Jiles Ship, president of the New Jersey chapter of the National Organization for Black Law Enforcement Executives puts it, “It’s not because people don’t have the ability to run a business. It’s because they’re not given the opportunity. When you take those opportunities from people, they still have to make a living.  They still have to feed their families. That’s what drives the black market.”

Part of what also drives the illegal weed market is demand for edibles, food products in various forms, such as gummies, chocolates, and baked goods, that contain varying levels of THC concentrations. There are a variety of reasons people prefer edibles over smoking or vaping marijuana, beyond just personal preference.

Evan Nison of the New Jersey Chapter of the National Organization to Reform Marijuana Laws (NORML) points out “Edibles are important for a lot of reasons. There are people who don’t want to get something into their lungs. There are landlords who don’t permit any smoking at all. It’s definitely an important category.”

A perfect example would be Ed Forchion, AKA The NJWeedman. The Philadelphia Inquirer reports “Forchion, also known as marijuana activist NJWeedman, has 16 varieties of cannabis on offer — including the high-grade Platinum Kush and Wedding Cake strains. He also sells marijuana-infused edibles and magic mushrooms.” Forchion understands the lay of the land as far as the demand for edibles goes, stating, “Women buy edibles. Women don’t want to be smoking in public, so they have a cookie in their purse and then reach in now and then and eat it.”

To his credit, Forchion is applying for a license. However, if approved, he will have to cease selling many of his edible products because the CRC  currently designates that “Ingestible forms … shall only include syrups, pills, tablets, capsules, and chewable forms.” Yet, logic and rudimentary economics dictate that if there is still a large demand for edibles, the supply will somehow happen.

Brown does not seem closed off the possibility of expanding the marijuana edible menu at some point, saying, “That’s not to say we won’t in the future but, as of right now, we’re starting out with just the addition of some things like concentrates. This is just the first cut.” Meanwhile, it’s likely that the underground market will continue to flourish to some degree.

Although the new guidelines do not include expanding the licenses available to recreational dispensaries, many people see the changes to the medical marijuana program as a prelude to changes in the NJ recreational marijuana market. According to app.com, “The terms of the licenses issued Friday emphasized the importance of ensuring patients’ needs are met before worrying about legal weed. License holders must wait at least one year before applying for a permit to transition into recreational sales and cannot change ownership for two years.”

If you would like to do some research on the organizations holding new licenses, here is a list from the Asbury Park Press:

The cultivation licenses were awarded to:

The four vertically integrated licenses were awarded to:

Myocarditis and MRNA COVID-19 Vaccines: A Cause for Concern?