Potential Democratic leaders of the sunshine state are vying to be the next champion of recreational marijuana legalization. Rep. Charlie Crist (D-Fla.), Crist took to Twitter to state, “Let me be clear: If I’m elected governor, I will legalize marijuana in the Sunshine State. This is the first part of the Crist contract with Florida.”

Speaking at a recent campaign stop for governor, Crist declared, “I believe in reinvesting in our communities, not jailing our residents. Legalizing marijuana will allow our police to focus on actual real crime. I will use much of the tax revenue we collect from marijuana to increase funding and training for police departments.” And in a nod to the issue of disproportionality and expungement, Crist added, “For too long, Florida’s justice system has disproportionately hurt and impacted Black Floridians and communities of color. For too long, we’ve focused on incarceration when we should be focusing on rehabilitation, forgiveness and restoring lives.” 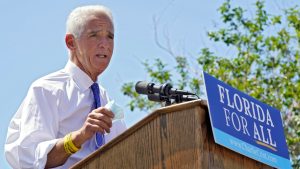 After opposing recreational marijuana legalization for years, Charlie Crist is now a vocal advocate for weed.
Source: liveplaytampabay.comCrist was not beyond using pathos to communicating his new-found optimism for marijuana to the masses, saying, “And for me, it’s personal. I lost an older sister. She had brain cancer several years ago. And I think about Margaret, and I think about how it wouldn’t have been as painful for her perhaps if marijuana had been legalized and the stigma taken off of it.”

His proposal for reform, called the “Justice for All’ plan, would “create a yet-to-be-determined tax rate for recreational cannabis” and then use the proceeds to “fund community investments — among other things — including police training, drug treatment programs and pay increases for teachers and law enforcement,” according to the publication Florida Politics.

However, while a member of the Republican party, Crist took a very different stance towards marijuana, one that has left a collection of skeletons in his closet which are not merely decorations for Halloween. In a recent radio ad by the organization “Progressive Choice PAC (PCPAC)”, the group stated:

“Under Gov . Charlie Crist, the NRA called the shots in Tallahassee, giving Crist big money and an ‘A’ rating, stopping even the most sensible gun control bills, allowing weapons to flow into our cities, even permitting concealed guns at work. But while Crist was coddling the gun lobby, he was cracking down on us — passing maximum sentencing laws, signing the nation’s harshest marijuana laws, and enacting the country’s strictest penalties against non-violent offenders, many of whom just happen to be black.”

Specifically, the PCPAC is pointing to two different laws Crist signed while Governor of Florida from 2007-2011. First, is the “grow house law.” According to Politifact, “The grow house law made it a second-degree felony to grow 25 or more plants; the previous law set the threshold at 300 plants” and “ allowed law enforcement to destroy bulky grow house equipment and simply take photos or video.” Crist also signed into law was has been dubbed “the bong law,” which “Prohibits retail sales of certain smoking pipes and smoking devices under certain circumstances; specifies criteria for the lawful sales of such items” and “provides a criminal penalty for unlawful sales of such items.”

Given the broader context of the anti-marijuana ethos in the Sunshine State, these laws were on the more reserved side of prohibition. As Allen St. Pierre, executive director of National Organization for the Reform of Marijuana Laws (NORML), frames it, “In general, no drug policy reform group, including NORML, viewed the passage of the 2008 anti-cultivation laws as being particularly harsh as much as we did out-of-touch with where most rest of the country is moving politically on cannabis policy,” St. Pierre told PolitiFact Florida.

While Crist did sign these bills into law, neither of these laws was the brainchild of Crist. However, while governor, Crist cannot escape the fact that Florida had (and continues to have) a horrible reputation in terms of its overly punitive stance towards marijuana. Here is what NORML wrote in the article The Five Worst States to Get Busted With Pot”

According to a 2009 state-by-state analysis by researcher and former NORML Director Jon Gettman, no other state routinely punishes minor marijuana more severely than does the Sunshine State. Under Florida law, marijuana possession of 20 grams or less (about two-thirds of an ounce) is a criminal misdemeanor punishable by up to one-year imprisonment and a $1,000 fine. Marijuana possession over 20 grams, as well as the cultivation of even a single pot plant, are defined by law as felony offenses – punishable by up to five years in prison and a $5,000 fine. In recent years, state lawmakers have revisited the state’s marijuana penalties – in each case electing to enhance Florida’s already toughest-in-the-nation criminal punishments.

To be fair, Crist has voiced support for the MORE  Act, a federal initiative to decriminalize marijuana that has been stalled out in Congress for over a year.  But Crist is ultimately going to have to answer for his mixed stances regarding marijuana. Of course, none of the “Johnny-Come-Lately” approach is lost upon Crist’s main political opponent, Nicole Heather Fried, an American lawyer and politician who has served as the 12th Florida commissioner of agriculture since 2019. 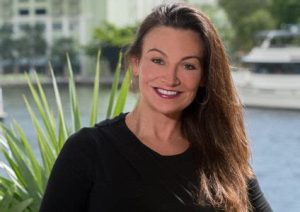 Nikki Fried has been a long-time champion of marijuana legalization but will have to answer questions about her connections to the marijuana industry while Florida’s Commissioner of Agriculture
Source: tampabay.comFried has been unabashedly pro-marijuana, arguing, “This is a plant that not only improves people’s quality of life, it’s an alternative to sometimes-dangerous pharmaceuticals and addictive opioids. It’s a medicine that an overwhelming majority of Floridians came together for, calling for constitutionally-guaranteed access.” Aware of apparent double-speak by Crist, Fried took him to task, tweeting, “Imitation is flattery, but records are records. People went to jail because Republicans like @CharlieCrist supported and enforced racist marijuana crime bills. Glad he’s changed his mind, but none of those people get those years back. Legalize marijuana.”

However, Fried will need to tread carefully regarding any statement about records. While Fried deserves credit for her role in spearheading the legalization of medical marijuana in Florida,  her lack of disclosure about her activities in the cannabis business sector got her in hot water. According to the Tennesee Star:

“Documents filed in 2020 show that Fried had a financial interest in a marijuana company doing business in Florida in 2019, the same year she created the Cannabis Office and the Medical Marijuana Advisory Committee in the Florida Department of Agriculture and Consumer Affairs.” Moreover, the Star reports,  “Also, documents filed with the Florida Commission on Ethics indicate that Fried’s 2019 financial interest in Harvest Health & Recreation, Inc was not revealed until months after she created the marijuana-related government organizations.”

Whether or not this information will be an issue for Florida voters remains to be seen. Regardless, full recreational marijuana is likely going to be a steep uphill battle in Florida. In January of 2021,  HB 343 and SB 710, both of which would legalize recreational marijuana in Florida, died in subcommittees, a potent reminder that Florida may not be ready for the next step in cannabis reform.