Texas has done it again–proving how resistant they are to change and common sense. With little, if any warning, the Texas Department of State Health Services (DSHS), under the direction of Commissioner Dr. John Hellerstedt,  has classified Delta 8 THC as a controlled substance, creating commotion and chaos for a multitude of CBD retailers and associated cannabis businesses across the Lone Star State. As the Texas Tribune reports, “the state health agency placed a notice in the rule change publication, the Texas Register. The notice said delta-8 remained a controlled drug in Texas.”

Texas and the Federal Farm bill

Delta 8 THC, a psychoactive substance that is a chemical analog to Delta 9 THC, the primary psychoactive ingredient in marijuana, is derived from hemp, and therefore a legal product under the Federal Farm Bill passed into law in 2018. Moreover, Delta-8 was de facto legalized in Texas nearly two years ago when  Gov. Greg Abbott signed House Bill 1325,  legalizing any hemp product with less than 0.3% Delta 9 THC. 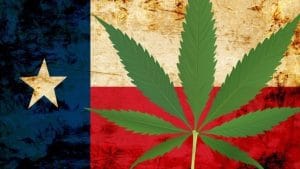 People were stunned to find out that the Texas Department of State Health Services used its powers to classify Delta 8 as a controlled substance, thereby making it illegal in the Lone Star State
Source: change.orgHowever, every state has the autonomy to set its own laws and declare various substances as illegal. The biggest problem was the surreptitious nature in which Texas declared Delta 8 illegal. With little discussion or notice, DSHS posted a notice to their Consumuable Hemp Program stating, “All other forms of THC, including Delta 8 in any concentration and Delta 9 exceeding 0.3%, are considered Schedule I controlled substances,” according to the Dallas Morning News.

Texas: A Lack of Clarity

Another major issue is the utter lack of clarity of the law itself. DSHS itself states, “Sale and possession of these products currently constitutes a criminal offense in Texas. Complaints should be referred to local law enforcement agencies or, if those agencies do not wish to pursue, to DPS. DSHS has no regulatory authority over hemp products other than those that meet the definition of “Consumable Hemp Products” in HSC 443.001(1).” This lack of clarity and uniformity means law enforcement must exercise great discretion as to whether or not to arrest people selling or using Delta 8.

Predictably, law enforcement is largely not expected to aggressively pursue violators, especially retailers. Yet, retailers of Delta 8 remain uneasy about his legal grey zone. Susan Hays, an Austin-based cannabis attorney who helped organize the Texas Hemp Legal Defense Fund, points out, “People are panicking because of an agency web posting. They don’t know what the rules are; they’ve got a lot of money invested in this.”

A Lack of Transparency in Texas

Moreover, the method the agency used to post the new ruling is questionable. In September of 2020, DSHS posted, apparently without notice to the press, a document titled “Objection to Implementing DEA Rule Changes” on their website and invited the public to raise questions and potential issues via a virtual platform. Because of the lack of vigorous communication to media outlets, no one showed up to the meeting on October 6, just a month after their seemingly furtive posting.

Furthermore, DSHS apparently failed to follow the accepted posting protocol. As the Houston Chronicle explains, “when publishing their ruling in Texas’ official record March 19, they used screen grabs of a document rather than the text itself, records show and attorneys argue.”

The problem with this approach is that it because screen grabs are essentially images rather than text, they do not allow people, including lawyers, to use keyword search feature available on standard text or web-based documents. This slipshod, nontransparent  approach to posting a legal notice just added to both the lack and clarity of information

All of these behaviors translated into both intimidations and confusion on the behalf of Texas Delta 8 retailers. Andrea Steel with Frost Brown Todd LLC, an attorney representing Hometown Hero and board president of the Texas Hemp Federation (THF), explains it this way:

“There are certain procedures required to modify the Schedule of Controlled Substances in Texas, and whether such procedures were properly followed remains questionable. Further, modifications to the State’s Schedule of Controlled Substances are required to be published annually in the Texas Register before going into effect. Here, for the first time ever, the State buried a picture of the Schedule in a publication (as opposed to text), making it virtually impossible to find intentionally. Hemp and THCs in hemp have explicitly been carved out of the definition of ‘controlled substance’ under the Texas Controlled Substances Act. Conflicting language that does not reconcile with this explicit exception is confusing to consumers, businesses, and law enforcement, and raises serious issues of constitutionality.”

By passing this law in what appears to be a passive-aggressive manner, Texas has imperiled the rights of citizens. In essence, they have set up the equivalent of a “cannabis speed trap.” As THF attorney David Sergi wrote in the petition: “These recent developments have caught companies that sell hemp-derived products as well as their consumers off guard, immediately turning them into potential felons subject to arrest despite years of engaging in this same business without issue or law enforcement interference, and without having any knowledge of or intention to violate the law.”

The Impact of the Texas Ruling

Nor is this an issue solely for Delta 8 retailers, which are primarily CBD shops. The future of Hemp growers are also being potentially threatened by this new ruling. Greg Autry, organizer of the Texas Hemp Harvest Festival and owner of Sweet Sensi, an Austin-based hemp grower and a producer of CBD products, argues, “A lot of farmers are using delta-8 to sustain their companies and keep from going under,”adding, “There are stores that are selling it and they’re not going to stop selling it until … someone gets shut down or arrested. Because if they don’t sell it, they’re going out of business.”

As Autry is pointing out, there are broad financial and legal implications that go far beyond the intention of the DSHS ruling. Contracts between retailers and growers that were in place before DSHS threw this monkey wrench into the system will now have to be potentially violated or litigated, costing the industry untold fortunes. As the Houston Chronicle contends, “Crop growers typically harvest this time of year, but could be unable to sell any products if bulk buyers and manufacturers are skeptical of the plant’s legality.”

There are already challenges that call into question the legality of the maneuver. An Austin hemp manufacturer, Bayou City Hemp Company, in conjunction with Hometown Hero, a  retailer of Delta 8, have asked a judge to temporarily suspend the ruling. If granted, the suspension would last 14 days.

Meanwhile, the consequences of the DSHS ruling are already being felt by Texas residents. As reported by KTBX, a woman in Bryan was arrested for felony possession of  Delta 8 in early October. Adding to the confusion of the DSHS ruling is the fact that the source of Delta 8 is always in question. That’s because Delta 8 can be processed from hemp, technically legal under the Farm Bill, or from marijuana, making in violation of both federal and Texas law.

“It is a really confusing mess and everybody is scratching their head really, of which of these are legal and which of them are not legal,” said Peter Stout, Ph.D., President and CEO of Houston Forensic Science Center. Combined with limitations on testing, and you have the makings of large-scale ambiguity, something that is not good for either private citizens or those that work in the hemp industry.

Make no mistake about it. People are going to suffer as a result of this new move DSHS  if it’s not revoked. Many people depend on Delta 8 to treat a host of medical issue from anxiety and depression to chronic pain.

Jon Lobaugh, a CBD retailer in Lubbock that sells Delta 8, said, “We have customers, many, many, many customers over the age of 60, that are like, Wow, this is great. This is benefiting my life. And now, you got to think about them being if I, I could get my house raided for a pack of gummies in Lubbock, Texas, face jail time, just because I’m trying to be healthy.” Many of these customers, Lobaugh contends, use Delta 8 in place of narcotic pain killers.

In fact, Lobaugh states, “Some of these people will come in and show us the cocktail of pills that they have to take every day, and they do not like the way that they’re feeling. When they come in, and they try something natural and organic, that’s going to give them relief that they need, how do you put a price on that?”

It’s painfully obvious that Texas has put a sort of price on it, however, at least for the time being: freedom. For now, the eyes of Texas are upon you.