Marijuana farming is slowly joining the sustainability movement. As pressure mounts to reduce water usage and a carbon footprint, marijuana growers are increasingly using greener methods to cultivate and harvest their crops, which are experiencing increasing demand as more and more states legalize or decriminalize marijuana on some level. This unprecedented growth has led to ramped-up production via indoor growth facilities, an approach that is coming under scrutiny for its lack of environmental considerations.

In 2012, Researchers Evan Mills, PhD, and Scott Zeramby  found “that indoor cannabis consumed 20 billion kilowatt-hours of electricity annually, with additional amounts from direct fuel use, together corresponding to a whopping 15 million metric tonnes of CO2 released into the atmosphere each year—the equivalent of what you would get powering more than 2.5 million homes for a year.”

Then in 2020, Mills and Zeramby published another research paper that examined not only the dynamics of indoor growing of marijuana but also the failure of the regulatory process to keep up with the science as well as the unintended consequences created by economic incentives in the marijuana market. Specifically, they concluded, “Indeed, indoor cannabis cultivators continue to be passed over by most energy policy instruments developed since the energy crises of the 1970s. Moreover, some cannabis regulations are inadvertently driving energy use upwards, while ‘financial incentives’ for energy efficiency offered to indoor growers by utility companies subsidize and legitimize polluting activities that could be performed outdoors with virtually no energy use.”

Compounding the issue is the geographic location of many marijuana farms, which are often located in some of the harshest, most demanding climates. As the author, Christopher Jones writes: “Some of the biggest indoor cultivation facilities in the United States are located in regions where temperatures reach up to 120ºF in the summer: Las Vegas, Phoenix, and California’s Coachella Valley. Conversely, states like Michigan, Colorado, Massachusetts, and Illinois regularly dip below 0ºF during the winter months. Regardless of where indoor grow rooms are located, they have one thing in common: Optimal temperatures — 65ºF to 75ºF — and precise humidity levels are required to keep plants happy and healthy during their life cycle.”

The result, of course, is a massive use of electricity and a correspondingly gigantic carbon footprint. In response, the California Energy Commission has proposed all indoor cannabis operators convert to LED lights by 2023 in order to reduce strain on the electrical grid. However, it remains to be seen how many growers will follow the agency’s recommendation.

The reality is that what is needed is a return to more outdoor growing approaches, albeit with some significant, comprehensive changes. As Bobert Bregman, an Amsterdam-based marijuana grow expert states, “Despite the increased control on the growing variables in an indoor setup, growing marijuana outdoors still has many advantages – to the environment, the plant, and the grower.” One of those benefits is of course a reduction in the amount of energy it takes to grow marijuana because the light source is the sun.

There are challenges, however. To begin with, as Leafly points out, “some requirements may make outdoor growing nearly impossible, such as in areas where the only properties zoned for cannabis are in urban spaces” and “states, counties, and countries either don’t have the right climate for outdoor cannabis cultivation.”

There are also places where outdoor growing, for a variety of reasons, is banned by regulations. This is why Mills and Zeramby recommend “Cannabis policy and environmental policy must be harmonized” adding “until then, some of the nation’s hardest-earned progress towards climate change solutions is at risk as regulators continue to ignore this industry’s mushrooming carbon footprint.”

Additionally, there are some breakthrough approaches that may be helpful in making their transition back to outdoor marijuana growing. One such approach involves regenerative practices known as closed loops  “which continually recycle nutrients and organic matter back into the soil.” The idea behind closed loops is to treat your crops as part of a bigger biome that harnesses naturally occurring aspects of nature that are mutually beneficial to one another. 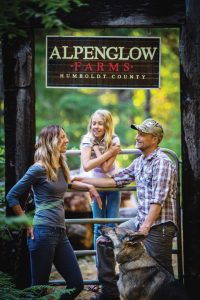 “One of the things that really sets us apart is that in a conventional farm, they would most likely bulldoze [the land] flat, erect greenhouses or put down ground cover, and then water only at the base of the plants, whether it’s a smart pot or a container or some sort of method of containing potting soil. That causes a lot of trouble and a lot more work, because water is life. Everything, whether it’s beneficial or a fungus or a pathogen, all of it wants to come to the base of that plant to find water. We really tried to blur the borders of our gardens, and we treat our entire farm as a living biome.”

One of the regenerative features of the farm is how they make use of the water supply to irrigate their crops. The farm makes use of a 450,000-gallon rain-catchment pond that fills up during the winter and spring and provides enough water for the plants during the dry summer growing season.

Or as Melanie Johnson puts it much more eloquently, “Rain permeates the earth releasing the fruiting bodies of mycelium and moss; it’s so pungent you can taste it. I so wish I could capture the smell, to place it in a mason jar to open like a medicine as needed. But this alchemy is authentic. It can’t be commodified and capitalized, which makes winter moments so sweet. Its time, just like its fragrance, is fleeting.”

What is not fleeting, however, is the couple’s ability to harness nature in a manner that is mutually beneficial to them, the environment, the consumers, and even society in general. From this perspective, what the Johnson’s are practicing is conscious cultivation.

Conscious Cultivation, as Green Rush Packaging writes, “is the first core principle of regenerative farming and is in many ways similar to the same kind of growth usually attributed to Conscious Parenting as done in children. It involves giving the plant what it needs as soon as possible, and anticipating what it might need and providing it with the same as well.”

Conscious cultivation is, in reality, an analog to the conscious capitalism element making appearances in marijuana legislation, much of which contains efforts to compensate marginalized communities for the war on drugs and measures to help members in these communities through policies that give them a foothold in the highly competitive marijuana market.

Collectively, these measures, along with more thoughtful policy formulation about marijuana and psychedelics, have the promise to usher in means to not only heal our planet, but possibly each other.