Venezuela’s National Survey of Living Conditions, also known as ENCOVI, revealed in its latest study that 94 percent of Venezuelans live in poverty, with 76 percent of this number living in extreme poverty, which is defined as getting less than $3 per month.

Naturally, this revelation destroys the argument that suggests that Venezuela is not as bad as it seems, and that the mainstream media is pushing a false narrative. In fact, the study shows that the Venezuelan situation is actually worse than expected considering that the country’s poverty rate is now the biggest in the whole Western Hemisphere.

Basically, the Venezuelan situation represents the worse crisis that this part of the world has ever experienced. After all, we’re talking about a brutal dictatorship that oppresses its citizens, with nearly 80 percent of the people who live in the country living in extreme poverty, and a refugee crisis that is currently the second-largest in the whole world after the Syrian.

Over the last few months, different studies have revealed that Venezuela is one of the few nations around the world where the vast majority of families who live in that country feel more worried about hunger than the COVID pandemic. On the other hand, the United Nations have also confirmed that the socialist dictatorship of Nicolas Maduro not only oppresses and persecutes the opposition but also commits crimes against humanity. 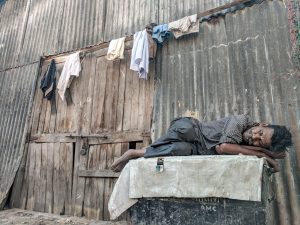 Despite this living hell that Venezuela has turned into, this case remains a secondary one not only for some of the most powerful leaders around the world but also for some of the strongest international and human rights institutions. Naturally, this situation got even worse since the beginning of the COVID pandemic, considering that every single country needed to focus its full attention on its internal affairs.

During this time, the Venezuelan situation got even worse, and the oppression along with the human rights violations against Venezuelans kept happening almost every single day, not only in capital Caracas but also in many other cities such as Ciudad Bolívar and Maracaibo.

This is the seventh study that the ENCOVI does in Venezuela, following its creation in the year 2014. The studies have always been made by an investigation team that includes academics from the Universidad Católica Andres Bello and the Universidad Central de Venezuela, which are two of the most prestigious universities of the South American nation.

In addition to the alarming poverty and extreme poverty rate that many Venezuelans are suffering, the ENCOVI study also showed that most people have to wait between two hours and three hours to buy some fuel for their vehicles. Also, the study showed that unlike many other poor nations across the globe, education doesn’t make any difference in Venezuela’s cases, considering that people who are not in poverty have studied eleven years while those that are suffering extreme poverty have studied between nine and ten years.

In addition, the ENCOVI study points out that the amount of money that Venezuelans get is so low that “if we could distribute it in the most equitable manner, we could get to the conclusion that per capita monthly income for every single Venezuelan would be $30, which represents only $1 per day. “

This way, the study explains that this situation is so grim that even if you double these numbers, “what would happen is that the extreme poverty rate will go down, but the poverty rate will remain. After all, for international standards, getting $2 per day still counts as poverty.”

The ENCOVI has always been criticized and persecuted by the Venezuelan regime’s authorities, which claim that the institute “is nothing more than a tool of the empire to sabotage our revolution”.