The Costa Rican government signed this Monday a decree that establishes the vaccination against COVID-19 as mandatory for public sector workers, and empowers private employers all across the country to demand it from their employees. The decree was signed by center-left President Carlos Alvarado and Costa Rican Health Minister Daniel Salas. The presidential office published in a public statement that this new decree will start to be officially applied on Friday.

“Private employers will have the responsibility to take the proper measures according to the country’s legislation and the institutional norms, in case workers don’t want to take the COVID vaccine,” the decree says. A couple of hours after its publication, many people on social media started to complain against the decree, pointing out it was violating Costa Ricans’ freedom. 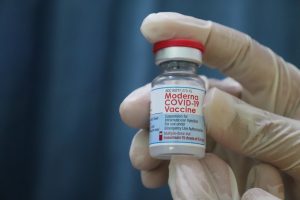 On September 28th, Health Minister Salas announced that he and President Alvarado would sign the decree in order to make the COVID vaccine mandatory for every single public sector worker. He explained this decision was based on “the necessity to reduce deaths and hospitalizations all across the country.” He also said the decree needed to be applied as soon as possible since Costa Rica has experienced its worst COVID statistics since the pandemic started in the last two months.

Street protests against the decree.

A couple of days after this announcement, people decided to protest against the Costa Rican government in the main cities, claiming that no one should be obliged to get the vaccine. Last week, a large group of protesters took the streets of capital San Jose demanding President Alvarado to respect the Costa Rican constitution and individual liberties.

Some of the protesters were private employers and business owners who also opposed the decree. Some of them claimed that the government didn’t have the right to tell them how to run their private business and what type of decisions to take. The protests were peaceful and no act of violence was reported.

Right after the protests, the Costa Rican government published a statement where it pointed out that the decree was fully legal since it is based on different resolutions of the country’s Constitutional Hall. The statement also says that the Constitutional Hall “has recognized the importance of massive vaccination as part of the sanitary assistance that must guarantee the Costa Rican state to protect health rights of all people.”

In addition, the government said that the Constitutional Hall’s jurisprudence determined that “guarding public health and preventing illnesses and diseases represent a legitimate constitutional goal that can justify the obligatory nature of vaccinations.”

To this day, Costa Rica’s intensive care units are above their optimal capacity of 359 spaces and around 90 percent of those who are at ICUs are people who haven’t received the first dose of the COVID vaccine or haven’t complete their vaccination scheme. The country, which has 5.1 million people, has applied nearly 6 million COVID vaccine doses. 3.470.013 are first doses and 2.290.280 are second doses.

September was the worst month that the Central American nation has suffered since the beginning of the COVID pandemic. After all, Costa Rica registered more deaths and positive cases than ever, with 68.459 and 880 respectively.

Currently, Costa Rica is one of the Latin American countries with the highest vaccination rate, considering that the Costa Rican health system has managed to apply the first dose of the COVID vaccine to 67.52 percent of the population, and the full vaccination scheme to 44.57 percent.

The week that went from September 26th to October 2nd, the Costa Rican government counted 227 deaths, representing the highest number in a week since the COVID pandemic started.