The Cuban regime has officially prohibited a pacific march requested by different members of a cultural and opposition group, who are planning to take the streets of the island’s main cities in order to demand the liberation of all political prisoners, a democratic pathway for the political crisis, and the full respect for Cubans’ liberties.

After some days without providing an official answer, the communist dictatorship published a statement where it claimed the march won’t happen since it won’t get the proper permission. The dictatorship also explained that it won’t recognize “any legitimacy in the reasons behind the march, since this is nothing more than an imperialist provocation with destabilizing goals.”

Naturally, this is not the first time that the Cuban regime tries to discredit any political action from the country’s opposition, using the anti-imperialist and anti-capitalist narrative to criminalize the right to protest and demand a change in the island after more than five decades of communism.

Most of the time, the regime claims without any evidence that most of the opposition leaders are CIA members or foreign agents that only wants to perpetrate a coup, being the argument Havana uses to justify their eventual prosecution. This type of conspiracy theory has been used for years, getting hundreds of people into jail without any right to defend themselves.

The group behind the protest.

Those who are asking for permission to peacefully protest in the main cities of the island are part of the group Archipielago, which was founded by artist Yunior Garcia after the nationwide massive protests that took place in July. They asked the Cuban regime permission to freely express themselves on the streets on November 20th. However, La Habana responded that it was impossible since there was a military event. 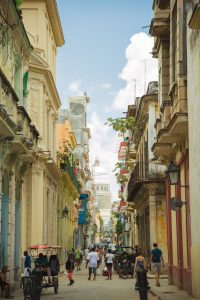 After that response, the group asked for permission to start the protest on November 15th, with the Cuban regime then publishing the statement where it denied it. A couple of hours later, Garcia published a public statement in the name of Archipielago, claiming that “It’s clear that the regime is unwilling to establish any type of civilized dialogue or open any type of political space to the people.”

According to the group, what protesters would do is to simply walk in the main streets of Cuba’s most important cities in order to avoid any type of violent clash with authorities. Moreover, they want to do this at the historic Havana’s Malecon and the Centro Historico in order to put a wreath in the Jose Martin statue, located in the capital city’s Parque Central, which is next to the Cuban parliament.

To this day, it remains unclear whether Archipielago will still do the pacific march, considering that Cuban regime’s authorities could arrest them, just like it did with many protesters who took the island’s cities in July. It is calculated that around 5,000 people could participate in this new protest.

A historic decision against the Cuban regime.

Far from being another protest, the march that Archipielago is asking permission to execute is one of the most important and historic in the history of the island. After all, this is the first time that an opposition group publicly ask permission from the Cuban regime to execute a march against it, which only reveals that people in Cuba are no longer afraid of a communist dictatorship that has oppressed them for decades.

And while it is quite difficult to know if this situation could finally bring democracy to the island, it is a fact that things are starting to change in Cuba. It started with the legendary “Patria y Vida” song. It continued with the nationwide massive protests in July, and now, with the Archipielago group and its bravery.