Evidence is accumulating that much like the mismanagement of our evacuation from Afghanistan, the Biden administration mishandled the surge of Haitian immigrants at our southern border. It turns out that President Biden, who didn’t listen to experts who warned him about the potential calamity that would ensue from a hasty withdrawal, also ignored key personnel who sounded the alarm about the looming immigrant crisis that was in the making.

As ABC News reports, emails from the National Border Patrol Council (NBPC) to the Del Rio Sector Border Patrol management, an arm of the  federal Department of Homeland Security (DHS), indicated “Months before the Haitian migrant surge at the southern border, Border Patrol agents on the front lines in Texas sounded alarms that Del Rio was vulnerable and resources could become overwhelmed” but “officials say preparations for the migrant surge only began when large waves started showing up.”

In fact, even as the tinderbox was started to ignite, Biden refused to address the issue of the criminal elements that were exacerbating and complicating a humanitarian crisis. Brandon Judd, president of the NBPC stated back as early as March. “A week ago I would not have called this a crisis. Today it meets the definition. We are overwhelmed. We do not have the resources to stop the cartels from bringing in illegal aliens, from bringing in drugs, therefore we are in fact in a crisis.” 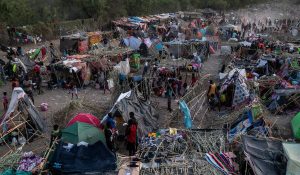 Conditions have reached a crisis level for Haitian immigrants caped out at the Texas borderBack on June 1, the NBPC asked for agents equipped with electronic tablets that could be used in a remote, distributed manner to intake and process the thousands of immigrants in Del Rio, Texas. NBPC President Brandon Judd emphasized, “This way, we can at least get part of the process finished before they even get to the station instead of wasting that time.” When there was no response from the federal government, they sent a follow-up email, again stressing the need for agents and technology. Two weeks later, NBPC received a terse one-sentence email from DHS: “This is being explored, several other platforms are being considered which are more efficient.”

Of course, grandstanding and deflection are the cornerstone of any inept leader. Understanding the power inherent in Rahm Emanuel’s acerbic maxim to “never let a serious crisis go to waste,” Biden quickly seized upon the image of a horse-mounted border patrol agent apparently whipping a Haitian immigrant. And while the image is disturbing and the agent in question should be investigated, it ultimately served as a sensational cover to obscure a multitude of much darker events.

In an obvious, desperate cry for help, a border patrol wrote an email stating, “The overcrowding is inhumane, especially for the children. Pod 3A is designed to hold 80 people and on this day we have 694 unaccompanied children with two agents maintaining custody. That is 867% of the stated capacity of this detention space. The agents cannot possibly provide for the care, health and safety of aliens in our custody, nor can we reasonably do so for ourselves.”

As the agent pointed out, the conditions are especially difficult for the children in these make-shift camps. Reported Sra Carter observed, “They’re lining up right next to each other. The smells, there’s no air, there’s really no windows to look outside. It’s a very, very stressful situation.”

Images of chaos reveal the depth of depravity being unnecessarily endured by these asylum seekers. Al Jazeera reports, “ Images from the Reuters news agency showed people with small babies and toddlers under makeshift shelters made out of reeds in Del Rio, Texas, just across the river from Mexico. Clothing was hung out to dry and rubbish was strewn on the ground, while parents washed their children using jugs of river water and tried to find patches of shade in the punishing heat. Migrants and asylum seekers said food remained scarce and there were not enough portable toilets.”

Meanwhile, the Biden Administration seems to want to play both sides of the proverbial political fence. Acting in an almost schizophrenic manner, Biden is simultaneously deporting some Immigrants while releasing others into the general U.S. population.

Biden has been criticized from both sides of the aisle. His deportations of Haitians have drawn fire from liberal outlets such as the New York Times, which wrote, “The deportation of Haitian migrants is a stark example of how President Biden has deployed some of the most aggressive approaches to immigration put in place by former President Donald J. Trump.”

In fact, Biden is getting backlash for implementing Title 42, an article of federal code dealing with public health, social welfare, and civil rights. According to Rolling Stone magazine, Biden has used aspects of Title 42 to label Haitian immigrants as a public health threat due to the potential of spreading COVID-19, thereby giving him the authority to remove them.

This selective use of enforcement smacks of xenophobia, a charge, sometimes accurately, leveled the Trump administration, rending Biden as not only cruel, by utterly hypocritical.

As Dr. Ronald Waldman, president of the human rights group Doctors of the World points out. “The prohibition for crossing the border has been applied selectively to asylum seekers, but students are allowed to cross the border, business people are allowed to cross the border, there’s a lot of people crossing the border. It’s a laughable line of reasoning. We’re in the middle of a pandemic. We’re trying to convince people of the importance of public health and to listen to the advice and recommendations of public health authorities. It’s making a mockery of public health.”

Moreover, the genesis of the mass Haitian migration is in conflict with statements made after by the Biden administration. As My Journal Courrier reports, “Haitians began crossing there this year, but their numbers ballooned after a Biden administration program that briefly opened the door to some asylum seekers ended. The program allowed in a select number of people deemed by humanitarian groups to be at high risk in Mexico.”

Nicole Phillips, of the San Diego-based Haitian Bridge Alliance, which advocates for Haitian migrants, explains, “That’s why they rushed at this time to get in. They realized they wouldn’t be able to get in legally through a port-of-entry like they were hoping.”

Compare that move by the Biden administration to this statement by White House Press Secretary Jen Psaki: “And our message continues to be as you’ve heard Secretary Mayorkas convey, now is not the time to come for a range of reasons, including that we don’t have the immigration system up and running in the way that we want, including there is still a pandemic and Title 42 remains in place, and these are the steps that we’re taking in part to protect the border communities as well as the migrants themselves.”

Again, Biden seems incapable of matching his rhetoric with a cogent, coherent policy that humanely and effectively handles the crush of immigration that he himself precipitated, but then refused to address in a timely fashion.

In a stinging rebuke, special envoy to Haiti Daniel Foote wrote, “I will not be associated with the United States inhumane, counterproductive decision to deport thousands of Haitian refugees and illegal immigrants to Haiti, a country where American officials are confined to secure compounds because of the danger posed by armed gangs to daily life. Our policy approach to Haiti remains deeply flawed, and my policy recommendations have been ignored and dismissed, when not edited to project a narrative different from my own.”

Meanwhile, even as some Haitian immigrants are being deported, others are being let in, underscoring what appears to be a random, haphazard approach to dealing with the crisis. A Border official stated to ABC News that, “Haitians have been freed on a ‘very, very large scale’ in recent days.” And the Seaton Post reports, “The Homeland Security Department has been busing Haitians from Del Rio to El Paso, Laredo and Rio Grande Valley along the Texas border, and this week added flights to Tucson, Ariz.”

So this is the Biden immigration policy towards Haiti:

Invite them in a manner that doesn’t give them enough time, causing a panicked rush that results in overcrowding at the border. Ignore the request for resources and human capital to deal with the influx that you created. Allow thousands of Haitian immigrants, including children, to live in squalor, but act deeply concerned about a potentially racist event. Indiscriminately deport some immigrants, while releasing others who have likely not been vetted, including being tested for COVID-19, the very issue you used as a legal pretext to deport fellow Haitians. Meanwhile, reiterate that they should not come to the United States, even as fresh rounds of immigrants arrive daily.

Did I miss anything?