Bloody. Violent. Deadly. All of these words accurately describe the Taliban, as the extremist militant group proved in their rapid ascension to power in the wake of the chaotic and calamitous withdrawal of the U.S. and other NATO forces at the end of August. But you would be foolish to believe that the extremist group, also known as the  Islamic Emirate of Afghanistan, does not understand the value of impression management, particularly of Western and other democratic nations.

To that end, the Taliban invited the writers from the publication The Telegraph to have high tea. That’s right, the group responsible for the murder of our 13 soldiers on August 26, along with the widespread reports of intimidation, torture, and killing of any perceived opposition, decided to do the most civilized of all things, thereby attempting to neatly dress up their death machine in the palatable robes of distinguished aristocracy, telling The Telegraph, “We are very happy that we are now the leaders of the government. We want to have good relations with all the rest of the world. We want to work with foreigners and have good relations.”

This comes on the heels of a series of press statements issued by the Taliban shortly after the fall of Kabul, designed, no doubt, as a sort of “charm offensive”:

“All those who have previously worked and helped the invaders (Western troops), or are now standing in the ranks of the corrupt Administration of Kabul, the Islamic Emirate has opened its door for them and have announced for them amnesty.”

“In areas which are under the control of the Islamic Emirate, people should lead a normal life, especially in the official arena, whether it is educational, healthy, social or cultural.”

There are those that see the new Taliban’s overtures as genuine reflections of their desire to be more moderate rulers of the beleaguered nation. Hiu Sasongkojati, writing for medium.com, postulates:

“Meanwhile, Afghanistan of today is not the same as it was in 2001, with higher educational enrollment, increase in gender parity, as well as relatively better standards of living. Thus, there is merit in thinking that the situation has evolved beyond the ideological Taliban that they might need to be more pragmatic in their governance of the new society.”

Others, though, are cautiously optimistic. As to be expected, much of the hesitancy about the fate of Afghanistan is connected to the future treatment of women, especially women who have had political positions.  Farzana Kochai, one of only a handful of female members of the Afghan Parliament, offers the following assessment of the Taliban rule: “Let’s see how they are flexible in regards to women and what they will do in regard to politicians and those who are against them.”

Still, there are reasons to take such statements and displays of gentility with a grain of salt, especially where the treatment of women is concerned. In particular, the treatment of Beheshta Arghand, the first female journalist to interview the Taliban leaders in the aftermath of their takeover, cast doubts about any equitable future with regard to the role of women in Afghani society. 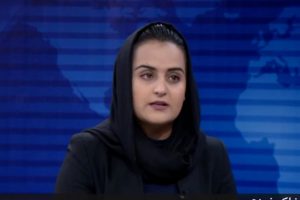 Beheshta Arghand, a reporter at TOLO news network, was forced to flea Afghanistan
Source: womensagenda.com.auArghand claimed that “off-camera, the moderate facade of the Taliban soon fell, and in the following days her life turned into a nightmare” as she and her female associates at TOLO news were forced to wear a hijab, a scarf closely covering their heads but leaving the face uncovered while the Taliban simultaneously suspended female anchors in other stations.

And there are border issues beyond the treatment of women that should give the international community pause in fully legitimizing the Taliban as genuinely open to a more progressive and inclusive rule. As CNN pointed out, “But every pledge has been caveated by a reminder of the Taliban’s ‘core values’ — a strict interpretation of Sharia law, which experts say has not been drastically re-imagined in the space of 20 years.”

The Taliban themselves made their interpretation of the overall arc of their rule when Taliban commander Waheedullah Hashimi stated plainly, “There will be no democratic system at all. We will not discuss what type of political system should we apply in Afghanistan because it is clear. It is sharia law and that is it.”

Much like the fall of Vietnam, Americans will likely lack the will and resolve to be further entangled in a war that was waged for 20 years. Any future involvement to coerce the Taliban to take a more modernistic approach to rule will take strong-arm diplomacy, including coordinated sanctions, backed by the threat of military reprisal should concessions not be met. Given Biden’s track record thus far in Afghanistan, I wouldn’t hold my breath. Your tea is likely to get cold in the interim.