I remember as a child listening to my mother read The Three Billy Goats Gruff, a Norwegian fairytale. I have distinct memories of being scared by the pictures of the troll, who looked devilishly evil and hideous, at least to a six-year-old (or whatever age I actually was, since they all run together now).

I also remember re-reading the tale over and over again by myself, probably to prove the commonly accepted theme that the only way to face a bully (ie. fear) is head-on with full resolve and unerring determination and bluster. After all, the Big Billy Goat Gruff told the troll in no uncertain terms right before he obliterated him:

And I’ll poke your eyeballs out at your ears;

I’ve got besides two curling-stones,

And I’ll crush you to bits, body and bones.

And that theme of overcoming fear, of courage in the face of fear, is empowering, to say the least. But it’s also too easy, or critics sometimes declare, “too on the nose.” Rather, I think there is another interpretation that has something tangentially to do with fear but is more concerned with overcoming complacency. If you recall, the billy goats were out of grass to eat:

They loved to eat sweet grass, but sadly their field was now brown and barren because they were greedy goats and they’d eaten every last blade of grass.

But they were still hungry.

That’s why they wanted to cross the troll’s bridge:

In the distance, they could see a field that was full of lush sweet scrummy grass, but alas there was only one way to get to it – over a rickety bridge over a stream.

But under the bridge lived a terrifically terrifying terrible troll called Trevor – he was always hungry too. And there was nothing he liked better than to eat a nice juicy billy-goat.

Maybe the goats have something to teach us, as goats are known for wisdom (not really, but who knows?). After all, it’s easy to “get stuck” in the day-to-day habits of modern life. We dutifully prod off to work (rush hour), sit through a litany of borderline meaningless meetings (staff developments), binge-watch mindless shows on Netflix and Hulu (“Sitting Dead”), and then do it all again the next day.

Wash, rinse, repeat until suddenly, you realize you’ve eaten all the grass, and you’re metaphorically and spiritually starving for some barley, or hay, or even some kamut (okay, I’v never had kamut, which sounds like a character actor from a 1970s black and white German underground film that won the actor posthumous awards at the Cannes film festival in the early 2000s).

The point is, sometimes our present feast is over, and we need to find more fertile ground, lest our inner goats begin to waste away inside.  This is, in many ways, a fate worse than death, because it takes so long. At some point, sooner than later, you will need to sharpen your billy goat horns, put your head down, and plow over that inner troll who is blocking your way to a new life.

As the modern mystic and Eastern philosopher, Eckhart Tolle warns, “some changes look negative on the surface but you will soon realize that space is being created in your life for something new to emerge.”

And while complacency is a feeling, how do we define it? One of the best, and most powerful examples come from our work life. After all, it’s what “we do” as adults, or adult goats (known as a billy, or a doe). According to Bonnie Marcus, executive coach, author, and international speaker, there are five signs that you are sinking into the morass of complacency with regard to your job or career.

First, you are no longer striving to do your best. This means you cut corners whenever possible, not just to save time, but to avoid the stress of creating something of quality. You simply lack the drive to perform at the level you are capable of. As the great motivator Vince Lombardi said, “The difference between a successful person and others is not a lack of strength, not a lack of knowledge, but rather a lack of will.” When the will goes, so does passion, followed by performance.

Second, you are not staying up to date in your field and industry. You are tired of the workshops and seminars. You begin to feel that all of the messages, even from different presenters, are saying the same thing, and it’s utterly meaningless. You begin to make excuses why you can’t attend: “My favorite aunt (the one you never talk to) is coming to town; my car is having problems (with me hauling my ass in it to drive); I am not feeling well (because the presenter is a self-rightouss, pretentious a-hole that makes me want to puke).

Whatever the reason, you ain’t buyin’ any of what they’re selling because your capacity for growth in that arena is done, finito  kaput (kamut’s lesser-known younger brother.) Put into goat language, “naaahhhhhh…”

Third, you are not seeking or taking advantage of new opportunities. Everything takes on that monochromatic overtone, and every project has the same appeal, which is none. It’s like going trick-or-treating only to find they are continually giving out those tasteless orange peanut candies, or packages of Smarties left over from at least two Halloween’s ago, except it’s worse because they are all gray and devoid of sugar.

There’s simply no sweetness in any of the offerings, so there is no point in tasting them. Time to move on. (And if you are living in a neighborhood where they always serve crappy candy during Halloween, it’s time to move out. 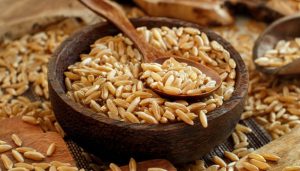 Kamut, older brother of kaput
Source: tipsforwomens.orgFourth, you’ve given up building relationships at work, especially establishing professional relationships with new colleagues. So, when your supervisor announces they are “tearing down silos” by creating “multidisciplinary teams” to engage in “collaborative workspaces” in order to think of “innovative solutions to the most pressing problems” and your reaction is, I like my silo, no thank you, you know things are not going to get any better and it’s time to make a change.

As the Scottish historian, satirical writer, essayist, translator, philosopher, collector of cellophane, creator of the fidget spinner (okay, only the first 5 are true) Thomas Carlyle once opined, “I’ve got a great ambition to die of exhaustion rather than boredom.”

And finally, the penultimate reason, or just the fifth reason to be more accurate, you realize you don’t share your opinions anymore, at least not in any meaningful manner. “What did you think of the book we’ve been reading for our study group?” It’s okay (you didn’t read it anyway). ”What’s your opinion of our new strategic goals?” They seem pretty strategic. “Do you think we should reword our mission statement?” We have a mission statement?

You get the idea. It’s all mind over matter: you don’t mind, so it doesn’t matter.

These same signs of apathy and indifference can also likely be attributed to a relationship. But that’s way too weighty of a topic for this billy goat to take on.

The bottom line is, when you are this bored, this complacent, it’s time to kick some troll ass and eat some new grass (I couldn’t resist the charming rhyme).  I am not arguing to be rash, just take out the papers and the trash (damn, I did it again)!

Really, my friend, it is time to move on. Yes, there are things you will need to formally arrange before you pack up and move to new pastures (stealing all the office supplies you can smuggle out in small boxes), but don’t wait too long. Complacency has a way of washing over your soul until your start to slowly drown in your stew of boredom and resignation. That, and the grass growing on the other side of the bridge may not be there when you finally screw up the courage to bolt.

If you struggle, keep in mind what Geoge Harrison said: “The Beatles saved the world from boredom.” I know that isn’t really helpful, but it’s a damn cool quote, and it saved me from a boring ending! (I hope I didn’t get your collective goats, that would be so gruff.)