Mars may soon be giving up some of its secrets, thanks to the NASA rover Perseverance, which collected its first rock sample from the Red Planet. At first blush, you might ask, it’s just rocks, what’s the big deal? But as any geologist will tell you, rocks hold the key to understanding a planet’s past.

In the case of Mars, scientists are hunting for evidence that may indicate a more hospitable environment in the distant past, one far different from the cold, thin-aired planet we know today. As reported by BBC News, “Some 3.5 billion years ago or more, water was flowing on the surface. It carved channels still visible today and pooled in impact craters. A thicker carbon dioxide (CO2) atmosphere would have blocked more of the harmful radiation. Water is a common ingredient in biology, so it seems plausible that ancient Mars once offered a foothold for life.”

The new rock sample, taken from the Jezero Crater, where signs of a watery past are evident from ariel photos, may help scientists unravel the mystery of not only how the planet used to be, but what caused it to change so radically.

One indicator of life is the presence of carbon-based materials, in particular carbonate. As NASA explains, “ We know that most of the current Martian atmosphere consists of carbon dioxide. If carbonate minerals were formed on the Martian surface by chemical reactions between water and the atmosphere, the presence of these minerals would be a clue that water had been present for a long time–perhaps long enough for life to have developed.”

Although there have been some initial setbacks with the project, including sample tubes that turned out to be empty, Jennifer Trosper, project manager at NASA’s Jet Propulsion Laboratory in Southern California, is optimistic about the newest sample obtained by Perseverance stating, “The project got its first cored rock under its belt, and that’s a phenomenal accomplishment. The team determined a location and selected and cored a viable and scientifically valuable rock. We did what we came to do. We will work through this small hiccup with the lighting conditions in the images and remain encouraged that there is a sample in this tube.”

By sampling rocks from Jezero, NASA scientists are hoping to uncover some echo of life, known as a biosignature, in the form of terrestrial carbonates, which can lock up biological evidence within their crystals. One type of structure that sometimes survives is a stromatolite. And this is where it gets interesting. According to Science Struck, stromatolites are  “sedimentary structures that are formed by cyanobacteria.” Cyanobacteria in turn, may be the key to initially generating an oxygen-based atmosphere, a requisite for life, at least as we know it on Earth. 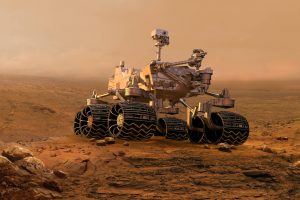 The Mars Perseverance Rover
Source: chronicletodaynetwork.comAs UC Berkley points out, “The cyanobacteria have also been tremendously important in shaping the course of evolution and ecological change throughout earth’s history. The oxygen atmosphere that we depend on was generated by numerous cyanobacteria during the Archaean and Proterozoic Eras. Before that time, the atmosphere had a very different chemistry, unsuitable for life as we know it today.”

So, if it turns out that the Mars rock samples contain stromatolites, which would then indicate the presence of cyanobacteria, this would jive well with the topographic indicators of water. Taken together, the presence of carbon, oxygen, and water may then be evidence of a once-hospitable environment, one that could potentially support life. Jesse Emspak, writing for Scientific American, frames it this way: “If life appeared on Mars in the past, when the planet might have been wetter, with a thicker atmosphere, then organisms could have gotten a foothold.”

Of course, the rock sample has to first make it back to Earth, where scientists will carefully study the composition. However, patience is in order. Starting with an initial transfer to another rover, followed by a series of maneuvers in outer space, the canister with the rock sample will eventually be relocated to a European satellite, which then, according to the BBC, “will act like a cargo ship, bringing the precious rock and soil specimens back to Earth.” Unfortunately, if you’re used to priority overnight shipping, you may be a bit disappointed, because the sample will not be back until at least 2031.

Still, there is a reason to be optimistic, even if there is a delay, because the science we can bring to bear on the rock samples may yield some interesting findings. As the website Air and Space states, “Once returned to Earth by a future mission, these Mars samples can be subjected to more detailed analysis by a much wider set of instruments than can be carried by Perseverance. Moreover, sample archiving can preserve material for future analysis here on Earth by new and/or more detailed instruments that may not yet exist.” And, given the nearly 10-year delay of the arrival of the sample, it’s likely our analytical technology will have grown in capacity and accuracy, potentially yielding greater insights.

The most interesting perspective, however, may not be derived from the past, but looking forward to the future. Scientists are hoping a thorough rendering of the composition of Martian terrain, geology, and atmosphere will make future exploration, and perhaps colonization possible. If that sounds like something from a movie, you may be surprised that NASA has claimed that “[E]ventually, humans will most likely journey to Mars.”

But don’t pack your bags too quickly. Currently, our launch protocols only allow missions every 26 months. Moreover, NASA estimates it will take approximately 21 months to complete a two- way trip (with a 3 months stay) to Mars. That probably exceeds the leave policy of most companies’ HR departments, so being independently wealthy is probably a prerequisite, at least for right now.

Yet, Mars remains a highly compelling heavenly body. As the author John Updike informs us, “Mars has long exerted a pull on the human imagination. The erratically moving red star in the sky was seen as sinister or violent by the ancients: The Greeks identified it with Ares, the god of war; the Babylonians named it after Nergal, god of the underworld. To the ancient Chinese, it was Ying-huo, the fire planet.” And in about 10 years, we will know the secrets that Perseverance has discovered, beginning another chapter in our fascination with the Red Planet.