The latest episode of Brazil’s major political crisis took place last week, as Brazilian senator Renan Calheiros said during a radio interview that a Senate investigation into the government’s handling of the COVID pandemic will recommend in the final report that right-wing President Jair Bolsonaro face 11 different criminal charges.

Calheiros, who was the person leading the inquiry, is one of the most vocal opposition politicians in the South American nation. Critics say the fact that he was the one leading the investigation suggests this could be another case of the legislative branch taking actions against President Bolsonaro based on political interests. On the other hand, different media outlets and political analysts claim that while Calheiros role might seem suspicious, the investigation was made in the most transparent manner. 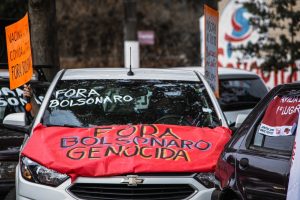 During the interview, Calheiros explained that the investigation was officially launched in April, and it had already collected “plenty of evidence” to show that President Bolsonaro must be charged “with genocide against Brazil’s indigenous population.” In addition, he explained that President Bolsonaro must be charged with violation of different sanitary measures, forgery of private files, malfeasance, the irregular use of Brazil’s public funds, incitement to crime, and some other alleged crimes.

Despite these remarks, and the alleged evidence that the Senate investigation could show, most political analysts in Brazil agree that is quite unlikely that this situation could eventually lead to any sort of trial. In fact, many political analysts in Brazil suggest that this situation could actually benefit the conservative leader, considering that he has been claiming over the last few months that the Senate is biased and wants to commit a “political assassination.”

Being a populist, President Bolsonaro could capitalize the Senate’s actions against him and the huge possibility that these won’t affect him to increase his popularity. A situation that the Brazilian president desperately needs considering the second rise of former president and left-wing leader Lula da Silva, and the way so many polls in the country suggest he’s the absolute favorite to win the upcoming presidential election.

The conservative leader, who was infected with COVID-19 last year, has been vocal in his stance against the lockdown measures to contain the spread, claiming that such approach would end up being “the worst thing for the poorest communities in Brazil.”

In addition, President Bolsonaro has pushed unproven treatments against COVID, especially the hydroxychloroquine, which he said he used to treat himself when he was infected. Moreover, he has expressed some vaccine doubts and even downplayed the severity of the COVID pandemic, making controversial and even offensive remarks where he suggested that COVID wasn’t a deadly virus.

More members of the Brazilian government.

Far from being President Bolsonaro the only member of the Brazilian government that the Senate will formally ask to be charged for different crimes, there are other figures that the investigation also make name. This way, the investigation will recommend that President Bolsonaro’s former Health Minister Eduardo Pazuello also be charged with crimes, along with some of the president’s sons. However, Calheiros hasn’t revealed which sons could face criminal charges.

While the office of Brazil’s Attorney General has the legal power to charge the country’s president, the Supreme Court (which has been vocal on its stance against President Bolsonaro’s authoritarian positions) will have to request authorization from Brazil’s lower house to properly proceed. On this point, the main issue that this process has is that it is extremely unlikely that Congress might sign such a request, considering that the number of opposition congressmen in this part of the legislative branch is not as powerful as in the Senate.