This is something that many people have been asking themselves in both nations, considering that Colombia is experiencing a similar situation to the one that Venezuela suffered right before Hugo Chavez’s rise. In addition, Colombia has a left-wing populist that right now is the absolute favorite to win next year’s presidential election.

So in order to answer this question, here are some important facts to take into consideration.

People’s anger against the establishment.

The Venezuela that decided to elect Chavez during the 1998 presidential election was a country that was sick and tired of the whole political class and the widespread situation that the nation was experiencing. After all, even when Venezuela was still the most prosperous country in Latin America at that time, things were getting deteriorated in comparison with the 1970s and even a significant part of the 1980s.

In addition, an economic crisis and different corruption scandals destroyed the bond between a large part of society and the main political parties. People started to feel like their country was some kind of Gotham city where those who ruled it were nothing more than a bunch of thieves.

Unfortunately, something quite similar is happening in Colombia. A large amount of people have a lot of resentment against the political establishment and institutions, but the reasons are not only corruption scandals and the rise of poverty caused by the pandemic. In fact, the main element that explains this situation is the deep polarization, a reality that will inevitably be reflected in next year’s presidential elections.

Colombia is currently a divided country.

Another worrying issue that Colombia is currently facing is a massive division in terms of politics. On the one hand, a big portion of the country considers itself Uribista, in reference to the former center-right President Alvaro Uribe. On the other hand, a huge part of the nation considers itself anti-uribista, as they claim that he’s the reason behind most of the problems that Colombia is facing. 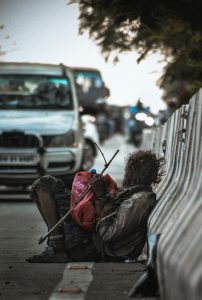 Just like what happens with the countries that are at the brink of a serious crisis, almost every single element of the nation is divided in these two groups. This way, you can see some media outlets that are Uribistas or anti-uribistas as well as academics, artists, and even soccer players.

Because of this, many analysts have been pointing out there’s no chance of reconciliation between these two factions, which could lead to the worst type of political violence between Colombians.

In Venezuela, it was clear that Chavez was going to be elected as president as he was a populist leader that ruled a large movement that promised a revolution in the country. Most people despised the establishment, so he was essentially the unexpected hero that represented this large part of Venezuelan society.

In a similar manner, Colombia also has a populist leader that has been exacerbating polarization, has a lot of popularity, and has claimed to be the “popular response” against the “excesses” committed by the Colombian establishment. His name is Gustavo Petro, and just like Chavez, he is a left-wing populist who once was up in arms against the state.

If Chávez conducted a failed coup against the Venezuelan state in the early 1990s, Gustavo Petro was a member of Marxist guerrilla M-19, who used to be one of the most violent terrorist groups in Colombia and South America. In fact, Petro has declared his sympathy for Chávez in different interviews, despite the fact he now recognizes that Venezuela is a dictatorship.

So even when the Colombian and Venezuelan contexts have their own uniqueness, there are some similarities that many should pay attention to. After all, we’re not talking about two nations with different languages and races. We’re talking about two brother countries that share a similar culture, a similar idiosyncrasy, and even a same history.

So, can Colombia become Venezuela? It won’t be that easy, but Colombia is clearly at the brink of a left-wing populist rise, which was exactly what happened in the neighboring nation with the rise of Chavez.