The Biden administration is waving its flag again, the flag of self-righteous indignation and moral puffery. Seizing what appears to be cruelty on behalf of a horse-mounted border patrol agent who uses severe and cruel methods to deal with Haitian immigrants, Kamala Harriss, the deputized “border czar,” condemned the act calling it “horrible,” and asking for “a thorough investigation into exactly what is going on there,” according to CNN.

While such low-hanging political fruit may be appealing to the average American, playing on their pathos for the suffering of our fellow beings, the fruit is rotten, if not poisonous, and its seeds were planted by the Biden administration as part of a chaotic and feckless immigration policy. The disaster unfolding on our southern border is of Biden’s making; he is the author of this tragedy, pure and simple, though President Obama and President Trump are culpable, as well.

Haitians fled their home country for legitimate reasons starting in 2010 as a result of a devastating earthquake that nearly destroyed the fragile island nation. Initially, most of the refugees immigrated to South America, in particular Chile and Brazil. But once there, “ they found work that dried up amid the pandemic, prompting them to head to Mexico in hopes of settling in the U.S.” And while they were initially welcomed by the Obama administration, it appears the hand that greeted them was an iron fist wrapped in a velvet glove.

To begin with, things started off as chaotically as the current situation at the US-Mexico border. According to the Miami New Times, “Immigration facilities have been so overrun that hundreds of immigrants have been moved to criminal jails, in violation of international norms.”

Then, after granting the Haitian immigrants “Temporary Protective Status,” or TPS, Obama did an about-face towards the end of his tenure and began plans for rapid deportation. As Salon reported, “Six years ago the government had granted a respite following the massive January 2010 earthquake, and the new directive puts unauthorized Haitian migrants currently in the country in jeopardy of deportation. More immediately, it has left many migrants facing an uncertain future at the U.S.-Mexico border, where thousands of Haitians have recently made their way from Brazil.”

The reality is that the Haiti Obama sent these immigrants to had never recovered from the 2010 earthquake. A 2020 Pulitzer Prize Center article describes the grim scene: “Nowhere are the broken promises of reconstruction more apparent than in the squalid camps that continue to exist today, and where on Jan. 12 some Haitians will mark 10 years of living under a tarp or behind pieces of rusty tin, with no running water, no latrines, no electricity and no security.”

This happened despite the supposedly humanitarian efforts of the controversy-riddled Clinton Foundation, whose inept, and potentially criminal mishandling of foundation funds deprived the vast majority of Haitians of any real relief of their miserable living conditions.

According to the Atlanta Black Star, “From January 2010 through June 2012, $9.04 billion in international funding was raised — $3.04 billion from individuals and companies, and $6.04 billion from bilateral and multilateral donors. Of the $6.04 billion, 9.6 percent, or $580 million went to the Haitian government, while 0.6 percent or $36.2 million went to local Haitian organizations. The lion’s share, 89.8 percent of $5.4 billion went to non-Haitian organizations, including private contractors, international NGOs, and military and civilian agencies of donor countries, including the Pentagon, which charged the State Department hundreds of millions of dollars.”

Then, in the wake of multiple tropical storms that battered Haiti, then-President Barack Obama acted upon the proposed directive, despite the fact that Haiti once again lay in ruins  A letter to the Obama administration from Reps. Lincoln Diaz-Balart, Ileana Ros-Lehtinen and Mario Diaz-Balart — all GOP House members from Florida, stated the obvious:  “The combined destruction from today’s catastrophic earthquake and the previous storms clearly makes forced repatriation of Haitians hazardous to their safety at this time. We strongly believe that it is for such a situation that Congress created TPS.”

But the pleas fell on deaf ears and the stealthy deportations began. However, the tragic irony was not completely lost on some people. Opal Tometi, an American human rights activist, writer, strategist, community organizer, and co-founder of Black Lives Matter wrote, “Obama’s decision is not only unconscionable, but the ultimate contradiction. Our nation’s first black president, himself the child of an immigrant, turning his back on thousands of black immigrants in their time of need at the end of a presidential term where he has repeatedly made claims to progress on immigration represents a disparity of the highest order.”

Predictably, Haitian immigrants did not fair well under President Trump. After lumping them in with other  “shithole countries,” Trump continued the deportation traditions of his predecessor. The Miami Herald reports that “Throughout the COVID-19 pandemic, the Trump administration has ramped up the expulsion of immigrants from Latin America and the Caribbean, despite calls by members of Congress to halt deportations during the deadly health crisis.”

And although Trump deported significantly fewer immigrants than Obama, including Haitians granted TPS, his actions nonetheless split up Haitian families because while parents were deported, children of Haitian immigrants, some 18,000, now US citizens, were allowed to stay, forcing families to make heartwrenching decisions about their future.  As Rony Ponthieux, a Haitian asylum seeker with TPS lamented, “I don’t have a job in Haiti, I don’t have a house, I don’t have anything and I left since 1999. If they are going to deport they are going to deport the family, the parents. So what are you going to do, leave [the children] behind? It’s a difficult situation.”

In point of fact, Haitians are the sad beneficiaries of a succession of American presidents and their counterparts in congress who have either shown indifference to their suffering or worse still, used their plight to score cheap political points while doing little to actually improve their situation. In fact, NPR reports that “Immigration judges have decided more than 32,000 cases of Haitians seeking asylum since 2001, rejecting the petitions about 80% of the time, according to data compiled by the Transactional Records Access Clearinghouse at Syracuse University.”

And although Haitians saw the Biden presidency as one more amenable to their tragic circumstances, they were sadly let down, again. As The Guardian points out, “ Haitian arrivals hoping for a welcome mat when processed may be in for a rude awakening. The Biden administration has reversed a hold on deportations to Haiti that it put in place following the earthquake. Flights full of migrants began leaving for Port-au-Prince this week, and eight more will reportedly go next week.”

And their future is anything but promising, as Haiti is mired in economic and civil crisis. A combination of natural disasters, internal corruption, and an at-best ambivalent U.S. policy towards Haitian immigration has led to widespread chaos, creating a  “choke point in the hands of rival gangs who’ve driven thousands from their homes, closed a major hospital, shut down fuel distribution routes and barred farmers from the markets.” 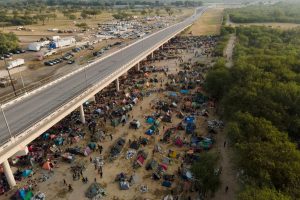 Thousands of Haitians are comped out along the International Bridge in Del Rio, Texas.
Source: APThings are rapidly spiraling out of control in Haiti, pushing the country to the brink of being a failed state incapable of providing basic needs and security for its citizens, echoing the darkness that is consuming Venezuela. An investigation by the United Nations Office for the Coordination of Humanitarian Affairs (OCHA) found, “The unprecedented level of violence and subsequent displacements is creating a host of secondary issues, such as the disruption of community-level social functioning, family separation, increased financial burdens on host families, forced school closures, loss of livelihoods and a general fear among the affected populations.”

The truth is we have not even a semblance of a coherent policy towards Haiti and its people. Jean-Claude Duvalier, nicknamed “Baby Doc”, who was the President of Haiti from 1971 until he was overthrown by a popular uprising in February 1986, famously said, “It is the destiny of the people of Haiti to suffer.”

In this sense, Haiti has become a sort of dark political archetype of oppression, a nexus of suffering and despair. It is within America’s power to help reverse this negative ethos, but it will take a coordinated, bi-partisan effort that puts the people of Haiti above politics.

But as Duvalier put it, “All I know is politics. Really, politics takes up most of my time; it’s nonstop.” Is that also America’s future?