The Lone Star State is in the news again, but not just for controversial voting legislation. This time, Texas has the dubious honor of having five members of one family being charged for participating in the January 6 riot at the U.S. Capitol. Working on a tip, the FBI has brought “. . . charges against Kristi Munn, Thomas “Tom” Munn, Dawn Munn, Joshua “Josh” Munn and Kayli Munn” as reported by MSM News.

NBC news reports that “Court documents said the arrests followed a tip from a relative of the fiancé of Kristi Munn, making this another instance of friends or relatives alerting investigators about who was in the Capitol.”

The Texas family members represent just a fraction of the approximately 530 arrests made in conjunction with storming of the US capitol by protestors in January, which left five people dead and more than 140 police officers injured. In addition to video footage, the Munn’s social media activity may be the most condemning piece of evidence. According to the Huffington Post, the Munn’s posted a photo on Facebook captioned, “Washington D.C. here we come… #StopTheSteal #TrumpIsMyPresident,” in the lead-up to the day’s protest. 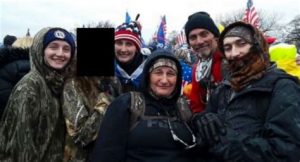 The Munn Family Source: newsweek365.comHowever, there is a growing sense in some quarters that some of the people arrested and charged for their part in the protest are being denied their civil rights by being labeled as insurrectionists. As Roger L. Simon wrote in The Epoch Times:

If you were to stage an insurrection on the United States government, would you (a.) simultaneously attack the power grid at multiple points, turning out the lights across the country, or (b.) dress up like a horned Star Wars character at a comic book convention and enter the Capitol building—unarmed—as if it were Halloween? You don’t have to be an experienced insurrectionist like the late Muammar Gaddafi—who was armed to the teeth during his, needless to say—to know the answer.

According to Julie Kelly of American Greatness, ”Dozens of defendants have languished in a D.C. jail for months without any relief in sight” and “the D.C. Court of Appeals refused to overturn the pretrial detention order for Timothy Hale-Cusanelli who was arrested on January 15 and has remained behind bars ever since.” One such case is Jacob Chansely.

Kelly points out that “Judge Royce Lamberth this week once again denied the release of Jacob Chansely, the so-called ‘QAnon shaman’ incarcerated since his arrest in mid-January,” adding, “Chansely is not charged with a violent crime. In fact, videos show Chansley speaking with police officers inside the building on numerous occasions.”

There are also those that have deeper suspicions about what actually happened on January 6. Writing for American Thinker, Steve McCann, who posits that what happened at the US Capitol building was a calculated set-up.

According to McCann, he wrote the following in the early morning hours the day after things spun out of control: “I abhor trafficking in conspiracy theories and have avoided doing so over my entire life.  Nonetheless, I cannot help but entertain a growing suspicion in the back of my mind, after having witnessed firsthand the events of January 6 and the near complete lack of police presence at the Capitol and knowing what Antifa has done in other pro-Trump rallies, that the powers-to-be at a minimum hoped what happened would happen.”

In addition to impugning the lack of security preparations for such a large gathering, McCann, who claims to be a veteran of protest such as March on Washington for Jobs and Freedom in August of 1963, claims that the protest had been infiltrated and compromised by far-left agitators who were largely behind the mob violence that ensued, stating, “It was difficult not to notice that among those at the doors at the West Front of the Capitol were stereotypical Antifa-looking militants and atypical Trump supporters waving Trump flags trying to incite others as the useless barriers of snow fencing had been easily breached beforehand.”

Alexandria Bruce, a journalist for Forbidden Knowledge, agrees with McCann, writing “Having seen a lot of footage of the so-called Capitol riot; of Antifa breaking the windows, of cops waving protestors into the building, of the Horned Guy vamping inside and others, including Dr Simone Gold walking daintily between the velvet ropes across the Capitol Rotunda, I was convinced that it was a patriotic protest that had been infiltrated by paid Antifa.”

Bruce also asserts that much of the mayhem we witnessed was a carefully orchestrated dramatic enactment designed to discredit Trump supporters while simultaneously sowing division among the US populace, stating, “ Cutting together the copious cellphone footage from the scene, Wooz News makes a very strong case that the shooting of Ashli Babbitt at the Capitol on January 6th was an Obama Era-style, super fake false flag shooting, staged entirely with crisis actors, fake blood and fake glass.”

Wow, that seems hyperbolic if not delusional at first blush, and I don’t think I could ever corroborate such claims. Yet, some context is in order. Our government has also been behind the madness that was MK Ultra, “a top-secret CIA project in which the agency conducted hundreds of clandestine experiments—sometimes on unwitting U.S. citizens—to assess the potential use of LSD and other drugs for mind control, information gathering and psychological torture.”

And let’s not forget Operation Paperclip, which brought roughly 1,600 top-notch German scientists in a bid to gain military and technological advantage over Russia in the run-up to the Cold War. The operation was headed by the Joint Intelligence Objectives Agency, and in direct opposition to orders by President Eisenhower’s orders, actively recruited Nazi war criminals and then whitewashed their records to hide their war crimes and Nazi affiliations.

If you’re like me, it’s all overwhelming, a bizarre mixture of Orwellian themes and conspiracy driven accusations that nonetheless, may have a basis in truth. It’s maddening because it is almost impossible to know the truth anymore.

Are the Munns simply a foolish family who took their patriotism to an excessive level and in doing so made America a national embarrassment, or were they hapless victims set up by a cabal of D.C. insiders and media elites? Or is the truth somewhere in between. Fifty, or maybe a hundred years from now, when official FBI documents have been declassified, maybe we’ll know the truth. For now, keep your eyes on Texas.