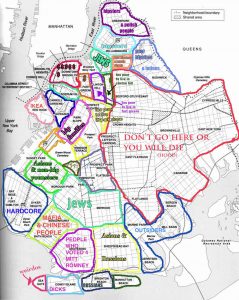 Take a look at the above map sent to me by Mark Nejmeh, owner of Newsweed.com. You’ll no doubt immediately recognize the racist overtones. Even though we have made tremendous progress, we know there are racist elements in the United States. However, that’s not the real story, sadly. The real story is this map is emblematic of an insidious dynamic working its way through American society: self-segregation. As an article from The Guardian so aptly frames it:

“It’s a fact: while Americans have countless tools with which to connect with one another, we are also watching fragmentation, polarization, and de-diversification happen en masse. The American public is self-segregating, tearing at the social fabric of the country.”

From the boroughs of New York, to the community areas of Chicago, to the wards of Houston, we seem hell-bent on voluntarily segregating ourselves. Predictably, class division is a defining feature of this segregation. According to inequality.org, “The most visible indicator of wealth inequality in America today may be the Forbes magazine list of the nation’s 400 richest. In 2018, the three men at the top of that list — Amazon founder Jeff Bezos, Microsoft founder Bill Gates, and investor Warren Buffett — held combined fortunes worth more than the total wealth of the poorest half of Americans.”

The modern philosopher Matthew Stewart sees an even darker reality at play, one that goes beyond the wealth accumulation of the ultra-rich, the so-called .01%. Stewart has identified the real culprits as the top 9.9 percent, people who have a median value of roughly $2.4 million, according to Stewart. Stewart believes 9.9%s are engaged in a sort cynical game of financial “keep away,” in which the coveted prize is wealth, and the deprived are people on the lower rungs of the economic ladders. Stewart hypothesizes this force is the great divider, the ultimate force of segregation, stating:

“The basic driver is something that we’re all familiar with. We all know the story of rising inequality. It creates a kind of rigidity, an instability. It also removes fact and reason from our discussions, that we’re not able to have a meaningful basis for discussion among all Americans.

Inequality feeds on itself to some degree. So the greater the concentration of wealth, the more that the people with that wealth can use it to consolidate their position . . .”

Of course, causality is a tricky thing, and Stewart never really explains how some people obtaining wealth prevents others from doing so themselves. That’s because Stewart suffers from the snapshot fallacy, the belief that data from one time period represents the same people in a future time period. It doesn’t.

However, there is something substantive and completely rational embedded in his sweeping generalizations about this economic segregation. For one, the arc of data does show there is a growing wealth gap and attendant shrinking middle class in the United States. More importantly, however, is what Stewart is implying about a “culture gap.” Think about it for a moment. It’s very unlikely that a person living in the Upper East Side of Manhattan has much in common with someone from the South Bronx.

Sure, they both deal with the existential angst of our imminent death. But only one of them actually fights on a daily basis to live in world of violence. As The Guardian points out, “The US can only function as a healthy democracy if we find a way to diversify our social connections, if we find a way to weave together a strong social fabric that bridges ties across difference.”

One place where this volitional segregation dynamic seems to be on naked display is in our schools. And I’m not talking about the obvious segregation of schools that are defined mostly by economic circumstances. The land of suburbia has its own issues with self-segregation.

Walk into any diverse campus and it’s not uncommon to see kids sitting at tables obviously divided by race. This phenomenon was something I saw regularly at the middle school my son attended: White kids at some tables, with Blacks and Latinos on their own pre-adolescent cultural islands.

At one school, a Black student wrote about his observations of the Asian students, saying:

“These kids consorted almost exclusively with each other. They sat together in classes, at lunch, and only joined clubs that already had a significant number of Asian international members.”

I wouldn’t go as far as ascribing any type of racism involved. We could even put on our sociologist hat and say the kids were merely using group affinity criteria to select their miniature communities. Yet, that explanation seems to fall short. It was more like a collective cultural blindspot, and inability to grasp what MLK Jr. was getting at through all his sacrifices and speeches.

And beyond the obvious notions that this is inherently wrong and antithetical to the modern American dream, there are practical, negative consequences for this type of behavior. Philip Rodkin and Travis Wilson, scholars at the University of Illinois at Urbana-Champaign, conducted an in-depth survey of 757 kids at nine elementary schools scattered across central Illinois.

What they found was that self-segregation had disparate consequences for Black and White children. Specifically, Rodkin and Wilson found “that black kids who self-segregate ─ who only hang out with other blacks ─ are more popular than black kids who have white friends.” The implication is of course that Black kids could improve their social standing by affiliating with exclusively only other Black children. On the other hand, they perceived they would suffer a fall in social status if they hung out with White kids.

The results for White kids were just the opposite: self-segregating hurt their popularity. It’s not hard to see how these are two diametrically opposed forces that put the kids in a sort of understated conflict. White kids want to associate with Black kids, but fearing social rebuke, black kids withdrew to their cultural safe zone. Of course, no doubt a lack of maturity is at play here. And the researchers also had positive news, which is that Black children were, in general, more socially popular than White kids, which of course is a major source of status in school.

Still, regardless of the reasons, it’s not laudable that kids, or adults for that matter, would choose to self-segregate. It not only runs counter to our values of diversity and inclusion but undercuts our sense of cultural progress while simultaneously tearing at the tenuous stitches that are barely holding us together as a nation.

Things are equally problematic at our Universities. Despite pleas for diversity and inclusion, some of the behaviors American universities engage in seem to be pushing students in the wrong direction. As USA Today reports, “The University of Alabama, for example, is endorsing a Goldman Sachs-backed ‘diversity’ program that benefits black, Hispanic, Native American and LGBT students, but excludes other groups. White? Asian? Straight? You’re not welcome.”

College housing is getting in on the segregation theme. Here is an announcement from the webpage of the University of Nevada (UNLV), Las Vegas:

“There’s an immediate sense of purpose on the fourth floor of Boyd Hall, where UNLV has established its first black and African American diaspora living-learning floor. Wakanda Forever door tags decorate the hallway and, defying their titles, games of Cards Against Humanity and Uno bring the community together.”

Nor is UNLV alone. The following is a description from Wellesley University’s Harambee House:

“The purpose of Harambee House is to provide social, emotional, and academic support to students of African descent at Wellesley College. Additionally, Harambee House provides enlightening cultural activities for the Wellesley College community, as well as educational, cultural and social activities for students, faculty and staff of African descent.”

And there are ardent defenders to this approach to voluntary segregation. Amie A. Macdonald, a professor at John Jay College of Criminal Justice/CUNY, offered this defense:

“…anyone concerned with the long-range goal of securing broad-based freedom and autonomy should be committed to the continued existence of racially defined communities on the grounds that different racial identities provide people with different experiences of the world. The preservation of racially defined communities of meaning secures the continued diversity of interpretations of the social world, thereby providing a richer array of know/edges from which to construct social, political, aesthetic, spiritual, and scientific accounts of our experience.”

Macdonald is not irrational, and she makes some valid points. Yet, while I do not begrudge the intentions, creating solidarity and fostering community among Black students, nor am I blind to the historical context that would lead to such beliefs, I have to wonder about the long-term negative consequences of such an approach to race.

My wife and I sent our son to a fairly diverse school. And while I cannot speak for all of the students, our son’s experiences were not only overwhelming positive on an academic level, but socially rewarding as well, as he became friends with a wide variety of kids from different cultures. At most of his social gatherings (which were at our house, because we were the cool parents that kids wanted to hang out with), the majority of the kids were Black, Latino, or multiracial.

I am not saying this in an attempt to virtue signal, which is an act I find contemptible. Rather, my point is his experience with diversity allows him to be more socially fluent. He is just as comfortable hanging out playing video games with nerdy white kids as he is break dancing at an all-Black party. (Of course, in reality, he knows some very nerdy black kids as well, so get down from your reactionary judgemental high horse that assumes I am stereotyping.)

The point I am making, perhaps painfully, is that we will continue to struggle to find unity if all we look at is our differences. Are we at a palace where the content of character matters less than the color of our skin?

Can we not erect a new age of respect? Find a way to deflect all the rage we collect? At the end of our collective day, it’s not about who we are but what we can become, together. As the recently-passed congressman and civil rights leader John Lewis said, “Now we have to create a sense that we are one community, one family. Really, we are the American family.”