“Let us not seek to satisfy our thirst for freedom by drinking from the cup of bitterness and hatred.” (Martin Luther King, Jr.)

There are many versions of the fairy tale Little Red Riding Hood. Although the best-known versions are from the Brothers Grimm or Charles Perrault, the origin of this beloved, yet frightening story may go back to an 11th-century poem from Belgium which was recorded by a priest, according to Jamie Tehrani, an anthropologist at Durham University in the United Kingdom. Because of this extended timeline, there are multiple variations that are modified  by a variety of cultures.

In this sense, folktales are subject to Darwinian-like forces, as they respond to societal norms and belief systems. Tehrani frames it this way: “Folktales are like biological species: They literally evolve by descent with modification. They get told and retold with slight alterations, and then that gets passed on to the next generation and gets altered again.”

Because of these evolutionary dynamics, there are many interpretations of each iteration, each informed by time and circumstance. The most obvious ones include “Stay on the path/don’t alter your course”; “Don’t trust strangers”; or “Beware of evil.” All of these are valid, commonly-accepted explanations. But there may be an even deeper symbolism and message that has particular resonance for the here and now.

Recall that the wolf was able to trick Little Red Riding Hood by dressing up as her grandmother (after devouring her, of course). Setting aside the more macabre aspects of this tale, there is an unmistakable metaphorical aspect that whispers the message “nothing is as it seems.”

As Tehrani puts it: “Ultimately, the predator is metaphorical. The stories are really about how people aren’t always who they seem to be, which is a really important lesson in life. Even people that we think we can trust can actually be out to harm us. In fact, it’s precisely because we trust them that we are vulnerable to what their harmful intentions might be toward us.”

Yet, this negative can be turned into a positive, if we see it as a path to freedom.

In Plato’s ancient text, Phaedrus, which depicts a discussion between the ancient Athenian aristocrat, Phaedrus and Plato’s teacher, Socrates, Phaedrus captures this sensibility, stating: “Things are not always what they seem; the first appearance deceives many; the intelligence of a few perceives what has been carefully hidden.”

The author Robert Piirsig, who employs a contemporary version of Phaedrus in his philosophical tale, Zen and the Art of Motorcycle Maintenance, touches on this theme when he says, “What makes his world so hard to see clearly is not its strangeness but its usualness. Familiarity can blind you too.”

We live in an increasingly complicated world, a whirlwind of images, soundbites, and video clips, a barrage of messages and opinions that pound us endlessly through 24/7 news sources and social media outlets. The end result is that we feel overwhelmed, paralyzed with the weight of information, much of which is contradictory, leaving us frazzled, if not teetering on a verge of intellectual schizophrenia.

There is no simple solution to this problem. We must do our best to look at issues from multiple perspectives, to allow information from a variety of sources to penetrate our consciousness so we can expand our viewpoints. But perhaps the wolf has something more to teach us, something that is eminently more practical, yet personal.

The wolf would ask us to step back and take inventory of our relationships, and he would pose the following questions: Who is deceiving you in such a way they are devouring your essence? Who is growing you, not taking you apart? Who makes sacrifices for you, not sacrifices you? Who has your best interests at heart, not uses your heart to solely advance their interests? Who fills you with energy and instills you with wisdom, and who drains your lifeblood and imbues you with bitterness? Who represents a path to your full freedom, and who seeks to keep you locked up? Who is nurturing you, and who is poisoning you with their toxins?

This is important, because we get multiple chances to set things straight, and in the context of toxic relationships, we also get more than one shot to set ourselves free, to climb out of the belly of the beast, to fulfill who we are unencumbered by those that would drag us down into the wells of their unhappiness. The poet John Mark explains it this way: “Toxic people attach themselves like cinder blocks tied to your ankles, and then invite you for a swim in their poisoned waters.”

And much like the nature of fairy tales, our stories can be modified over time, tweaked from the lessons that bruise us or inspire us, changed as our hearts are alternately hardened or softened, molded by the kiln of time. But unlike fairy tales, we are the authors of our stories, we get the final say.

Yet, this severing of ties, this spiritual emancipation from the purgatory of dysfunctional relationships, is likely easier said than done. This is because human beings are creatures of habit, and as such are stuck in patterns that can be traced back to our childhood.

And undergirding these negative ways of being is a sense of inadequacy and feelings of shame, feelings that tell us not only are we not good enough, but that we are simultaneously undeserving of happiness and people who help us feel happy, whole, and connected. Carla Shuman, a clinical psychologist, warns us about the debilitating effects of shame in the article, Overcoming Shame Increases Resilience:

After a while, we may not even realize that our shame is holding us back. We may feel such a high level of responsibility that letting go of shame feels wrong. Many of us worry that if we stop being hard on ourselves and carrying around the burdens of things we have said and done, we will do them again. An even more painful belief is that we don’t deserve to let go of our shame. These kinds of negative messages create a perpetuating cycle that can prevent us from reaching out for support, and ultimately, we lose motivation to change or lose hope that change is even possible.

Freedom and Our Future

And when people prey on that shame, when the wolves in grandmothers’ clothing exploit our good nature in exchange for disappointment and shame, we have to let them go, and in the process liberate our true selves. Because when all is said and done, the one person we cannot escape is ourselves, so our freedom lies within.

The modern philosopher Leo Buscaglia, known affectionately as Dr. Love, offers these words of wisdom: “A loving relationship is one in which the loved one is free to be himself — to laugh with me, but never at me; to cry with me, but never because of me; to love life, to love himself, to love being loved. Such a relationship is based upon freedom and can never grow in a jealous heart.”

From this perspective, freedom is love, if you are willing to take that first step into the dark forest.

We avoid pushing personal or ideological agendas because our only agenda is creating quality content for our audience, whom we are here to serve. That is why our motto is   ”Rolling with the times, straining for the truth.”

Freedom of opinion is important, and your opinion matters. Please share your thoughts in our survey so that Newsweed can better serve you. 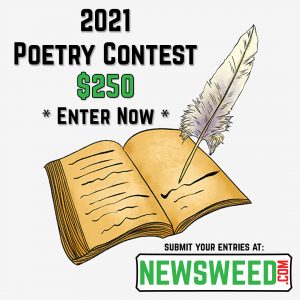