Over the last few decades, a significant portion of Argentina’s society has been pretty left-wing for good and bad. On the one hand, the South American nation has shown to be an incredibly tolerant society with an admirable respect for minorities and the willingness to support social programs. On the other hand, it has also embraced the involvement of the Argentine state in the economy, as well as some of the hardest regulations against the private sector.

While Argentina used to be one of the most prosperous nations around the world at the beginning of the 20th century, everything started to change with the rise of populist leader Juan Domingo Peron. An army general who deeply admired fascist Benito Mussolini and who opened his country’s doors to the Nazis who decided to flee the Third Reich once the war was lost.

Since the beginning of Peron’s reign, the Argentine state started to play a bigger role in the country’s society and economy. Many analysts and economists suggest this is one of the main reasons why Argentina started to experience a significant downfall that turned one of the wealthiest nations in the world into a third-world economy with nearly 50 percent of its population living in poverty.

After all, Peron’s charismatic figure seduced a large portion of Argentina’s society. A love story between the strongman caudillo and the people, which only got stronger after the way he was forced to leave the country, and the different right-wing dictatorships that opposed Peronism in Argentina. 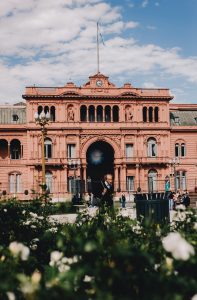 After the horror that the country experienced during these dictatorships, Argentine society’s support for Peron and his ideas increased more than ever. It was not only a political ideology, but also a stance and a rebel act against the criminals who did so much harm. In fact, former president Mauricio Macri was the first antiperonista to get into power democratically.

However, this left-wing idiosyncrasy that Argentina has been showing over the last few decades seems to be changing. In fact, it can be said a pretty large portion of Argentines are starting to embrace liberalism, capitalism, and especially free market.

A dose of reality in Argentina.

The reason behind this interesting change is the fact that left-wing economic policies have sunk the country into several economic crises. Moreover, another crucial element that many Argentines have been standing against is the decision of the latest peronista governments to support some of the most infamous left-wing dictatorships in the world, including the ones of Nicaragua, Cuba and Venezuela.

Also, different analysts suggest that the wide number of Venezuelan migrants who have escaped to Argentina could be playing a significant role in this situation, since many see them as the consequence of extreme left-wing policies that the Argentine left could eventually apply.

The rise of Javier Milei.

Another important reason that explains this change is the rise of Javier Milei, who is one of the most famous economists in the country, and recently became such an impressive media personality that he’s now a pretty promising politician. His newly-formed political party recently became the third political force in Argentina, and many believe he could have a chance in the next presidential election.

Of course, the most incredible fact about this new reality is that one of the factions that are showing more support for these right-wing ideas is Argentina’s youths. And this specific detail might be attributed to Milei and conservative intellectual Agustin Laje.

After all, the first one has been pushing an anti-left message to the young audience, while Laje has been raising his presence on social media in such an impressive manner that he’s currently one of the most famous and controversial figures in Argentina’s Twitter.

A real change or a pendulum move?

Getting to this point, the main question is whether this political phenomenon is a real change or just the typical pendulum move that takes place in all societies.

When Macri won the presidency a couple of years ago, many thought this represented some kind of right-wing revolution. However, Argentina’s left recovered the Casa Rosada in the next presidential election.

What seems to be quite different right now, is that the elements that are pushing so many Argentines to the right are not the typical resentment against the left, which was the main force that got Macri into power. What we’re watching right now is a real set of ideas and ideologies that many Argentines are following and believing in.

Are we at the brink of the least expected revolution in Latin America? Argentina will answer this question pretty soon.