A warrior in the fight for working-class people has passed. Richard Trumka, president of the American Federation of Labor and Congress of Industrial Organizations (AFL–CIO) and a close ally of Democratic Party officials, has died at the age of 72, with the official cause of death being ruled a heart attack.

Born July 24, 1949, in Nemacolin, Pennsylvania to an Italian American mother and a second-generation Polish American father, Richard Louis Trumka grew up in a hard-scrabble neighborhood, early on understanding the hard work and sometimes the degradation of working in coal mines, where his father was employed, and he later worked. Trumka was the quintessential common man, schooled by the tragedy and suffering associated with the struggle for workers’ rights, including the use of violence on both sides of the picket line. 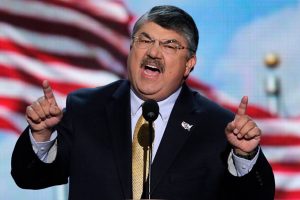 According to the Philadelphia Inquirer, as a child, Trumka learned to speak his mind at a young age, even to his father, remembering, “My dad had a drinking problem.” When his father asked what he wanted for his 12th birthday, Trumka didn’t hesitate. “I told him I wanted him to stop drinking.” Perhaps it was then that Trumka learned the power of words and his ability to use them to effect change, because according to Trumka, his father complied, right then and there.

Trumka learned about death early on, as well. As reported in the Observer-Reporter, “In 1969, when Trumka was already working in the mines, union reformer Joseph ‘Jock’ Yablonski, his wife, and their daughter were killed at home, just 11 miles from Nemacolin,” by assassins “. . . hired by union bosses to kill Yablonski after he unsuccessfully ran for president of the United Mine Workers of America labor union just a few weeks earlier.”  Eerily, the last surviving Yablonski assassin died just a month before Trumka while serving a life sentence in state prison for the infamous murders more than five decades ago.

Undaunted, Trumka attended Pennsylvania State University, receiving a Bachelor of Science degree in 1971, and then earned a Juris Doctor from the Villanova University School of Law in 1974. With JD in hand, Trumka went on to serve as a staff attorney at the United Mine Workers of America (UMWA) at their headquarters in Washington, D.C. His presence was a game-changer for the UMWA. Donald Redman, a government official in nearby Fayette County and a former miner who worked with Trumka, said, “He started out in the bowels of the earth. We got someone who was a polished attorney,” adding, “we went from hard hats and beating people up to pinstripes and briefcases.”

Bolstered by his success with the WMWA, Trumka showed solidarity with the struggle for rights in South Africa. Wade Henderson, interim president and CEO of The Leadership Conference on Civil and Human Rights, had this to say about Trumka’s work there: “Unafraid to challenge racism and classism anywhere, Richard Trumka was a civil and human rights champion who leaves behind a legacy matched by few,” adding “his participation in the Free South Africa Movement protests,” showed Trumka “unquestionably moved mountains in the fight for a more just and equal society.”

It was this unique combination of sophisticated savvy and blue-collar grit that allowed Trumka to thrive and eventually lead him to be secretary-treasurer of the AFL-CIO in 1995, working to expand the rights and benefits of working men and women. The AFL-CIO website has this to say about Trumka’s role as secretary-treasurer: “As secretary-treasurer, he carved out an innovative leadership role that continues today, working with programs that invest the collectively bargained pension and benefit funds of the labor movement to ensure they serve the long-term interests of workers.”

Trumka, in his typical hard-nosed, straight-forward style, tackled what he perceived to be racism regarding former President Barrack Obama in a 2008 speech before the national convention of the United Steelworkers in Las Vegas in July, saying, “We can’t tap dance around the fact that there are a lot of white folks out there who just can’t get past this idea that there’s something wrong with voting for a black man.”

He went on to be elected president of the AFL-CIO after the retirement of John Sweeney in 2009 and president of the Trade Union Advisory Committee to the OECD in May 2010, where he envisioned “. . . an economy of shared prosperity for all working families—an economy of rising wages, equal pay, respect at work, safe jobs, secure retirement, and the freedom for all workers to form or join unions and bargain collectively. Trumka served in the capacity of President of the AFL-CIO for more than a decade, right up until his death.

In 2017, Trumka distanced himself from former President Trump, for whom he worked as an advisor on Trump’s manufacturing council, eventually resigning in response to the Unite the Right Rally. Believing the rally to have racist undertones, Trumka issued a stern statement, rebuking Trump, saying, “We cannot sit on a council for a president who tolerates bigotry and domestic terrorism. President Trump’s remarks today repudiate his forced remarks yesterday about the KKK and neo-Nazis. We must resign on behalf of America’s working people, who reject all notion of legitimacy of those bigoted groups.” Trumka also tweeted, “I cannot sit on a council for a President that tolerates bigotry and domestic terrorism; I resign, effective immediately.”

Trumka’s accomplishments and legacy were honored by the United States Congress. Senate Majority Leader Chuck Schumer announced Trumka’s passing on the Senate floor Thursday, stating, “We lost a fierce warrior,” and Sen. Joe Manchin, D-W.Va., said Trumka was “a fierce advocate for working people and a truly decent man.”  Condolences also poured in from local chapters of the AFL-CIO. The Philadelphia chapter tweeted, “It is with great sadness and a heavy heart that we have learned @AFLCIO President Richard Trumka has passed away. You have been a champion for workers and an incredible pillar in the fight for workers’ rights,” and the Ohio Chapter tweeted, “We will continue your never-ending fight for social and economic justice for every working person.”

Perhaps the following words from Trumka best sum up his essence: