The winds of controversy are swirling around Nancy Pelosi, again, even as the embattled Speaker of the House flails in her attempt to round up votes for President Biden’s ambitious spending bills, including the one and a half-trillion-dollar infrastructure proposal.  According to an investigative report by Jesse Watters of Fox News, Pelosi has used her position of power and her deep political connections to cash in on multiple money-making schemes, schemes that smack of insider baseball.

Specifically, Watters weighed in on Pelosi’s and her husband Paul’s seemingly perfect timing with regard to stock-market investments, stating, “The couple has timed the market perfectly over the years. . .while Nancy’s been a Washington insider. Real estate, stocks, the Pelosis always know what the right investment is.”

An example would be how her husband Paul Pelosi, who apparently had inside knowledge about how the company First Wind was going to be purchased by SunEdison, “bought between $100,000 and $250,000 in SunEdison stock on Oct. 24, 2014, according to congressional financial disclosures,” as reported by investmentwatchbog.

The result was predictable because greedy politicians love nothing more than a sure deal that lines their pockets.  As the investment site Seeking Alpha  puts it, “Perhaps unsurprisingly, SunEdison’s stock soared an astounding 29% on news of this acquisition alone.”

In fact, according to Investopedia, “SunEdison stock became a favorite among growth investors and many well-known hedge fund managers, including David Einhorn, Ken Griffin, George Soros, and Daniel Loeb” so that  [B]etween June 2012 and July 2015, SunEdison stock climbed 2,200%.” And SunEdison knew the lay of the land, as well. With a muscular lobby presence in D.C., SunEdison exerted the pressure needed to set itself up for success.

The Washington Free Beacon reports, “The company has spent more than $1 million on its lobbying operation since 2011. It has employed lobbyists with the powerhouse Podesta Group since 2012, disclosure forms show. In 2015, it brought on 38 North Solutions, a green energy focused lobbying firm. Both firms lobbied to preserve federal tax credits for renewable energy generation.” And even though SunEdison eventually went bankrupt, the Pelosis reaped a financial harvest and the company got a much-need cash infusion to jumpstart their business.

This was not, of course, the Pelosi’s first foray into pay-to-play dynamics. They are perhaps known best for the controversy surrounding nancy Pelosi’s involvement with the Visa “swipe-fee” scandal. This is a pervasive problem that harms both companies and consumers. As The National Retail Federation explains, “Applied to millions of transactions each day, swipe fees are many retailers’ highest cost after labor, driving up consumer prices by hundreds of dollars a year for the average household and hurting retail sales because consumers buy less when prices go up.”

Using her position as Speaker of the House, Pelosi delayed passage of a bill that would have ended Visa’s exorbitant swipe fees. A CCN reports, “Visa had launched an all-out effort to influence Nancy Pelosi to delay the bill,” which eventually led to the bill becoming buried in a Financial Services  Committee. There is evidence that Visa lobbyists were at play. Watters claims, “Visa’s CEO personally met with her. She got donations from them. One of his advisers left and became a visa lobbyist himself.”

As the saying goes, politics makes for strange bedfellows. Here is how the lovefest worked, according to CCN:

“In March 2008, her husband Paul Pelosi got a phone call from his broker with a pre-screen invitation to invest in Visa at a price of $44 per share. Paul Pelosi snapped up 5,000 shares of IPO Visa stock. In two days the hot stock jumped to $64 per share, netting the Pelosis a cool $100,000. By July Visa, which had been enemies with Pelosi until the recent lobbying effort, sent her campaign $1,000 through its political action committee. That was on July 21, 2008. Two days later, its outgoing and incoming CEOs got a rare one-on-one meeting with the House Speaker.” 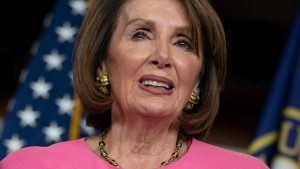 Nancy Pelosi is emblematic with everything that is wrong with the U.S. Congress
Source: oxnews.comTo be fair, Pelosi continued to buy stock in Visa even as the share price rose in value, which indicates a long-term investment perspective, and the swipe-fee legislation was eventually passed into law. Still, the Pelosis managed to parlay their strategy into a nice windfall, when “Paul Pelosi sold 2,000 shares of Visa on Aug. 7 for a total of $200,002 to $500,000,” which the couple used to buy office property, according to Barrons.

Most recently, Pelosi seems to have exploited President Biden’s push for using more electric cars as part of his environmental package. Benzinga writes, “Biden’s push for electric vehicles, which could include lifting the cap on sales, would give buyers tax credits again and is advantageous for Tesla. The president has also suggested a possible cash-for-clunkers program that could incentivize customers for trading in used vehicles towards the purchase of an electric vehicle.”

Seizing this opportunity to make money, Paul Pelosi “bought up to $1 million worth of Tesla stock when the price was roughly $640.34 a share,” which “shot up to $838 a share. . . “ according to The Wahington Times.

Interestingly, depending on the particulars of the final bill, the current infrastructure legislation that Pelosi has fought so dearly for may contain provisions that would include significant tax incentives for consumers who purchase Tesla automobiles. (Currently, most of the Tesla line cannot qualify for these tax credits because the price point is too high.)

The sad reality is that none of this is illegal. Apparently, the way governance laws are written, members of Congress, while forbidden from accepting direct cash bribes, are allowed to use knowledge of upcoming Initial Public Offerings (IPOs) to their investment advantage. This is a massive loophole in our current law and explains how U.S. Congress members can so readily get in on the gravy train that keeps our government in a state of financial surfeit. As CBS News points out, “lawmakers can go into confidential meetings with corporate leaders, understanding new legislation is going to come out next week, and are free to trade on that information.”

This sick and pathetic use of inside knowledge is endemic to Congress, a beast that feasts on information to fill the coffers of its lang-standing, most elite members. So whether it’s big pharma, green energy, or the banking industry, quid-pro-quo is alive and well in D.C. As  Peter Schweizer’s book Throw Them All Out contends, “The most valuable information is revealed in private meetings, phone calls, and correspondence. If members of Congress buy and trade stock based on that information, or if they pass that information along to a campaign contributor or their own financial advisers, they are not considered guilty of any wrongdoing.”

There are, of course, the heavyweights when it comes to the ubiquitous influence-peddling that colors the agendas of our elected officials. According to 24/7 Wall Street, “ The finance, insurance, and real estate sector account for the largest set of investments made by 19 of the 25 wealthiest members of Congress. The energy and natural resources, communications and electronics, miscellaneous business, health, and transportation sectors represent the largest investments made by the remaining representatives.”

Sadder still is the fact that Congress routinely uses national crises to enrich itself. Take the mortgage crises that started in 2008 and lead to the Great Recession, for example. Although there is a solid argument to be made that Congressional action was needed to shore up Fannie May and Freddie Mac, the government-backed mortgage giants that were on the verge of going bust from overextension of loans, the situation was capitalized by certain Congress members to their financial advantage. Insider Magazine frames it this way:

“Congressmen privy to this information reacted–not by dropping everything and drawing up a plan to save the economy, but by dumping stock and avoiding the losses everyone else would take in the coming month. Others bought stocks in financial firms that would later be saved by the federal government.”

So while Pelosi is a perfect example of politicians using their standing to acquire wealth, she is certainly not the only one. The top 25 wealthiest members in Congress have a rough aggregate wealth of over $1 billion, as 24/7 Wallstreet reports. Moreover, this is likely an underestimation of their true wealth, as they are not required by law to disclose everything.

At the end of the day, this is more than just Nancy Pelosi using her privilege and power to line her pockets, potentially at the expense of the average citizen. Because obscuring this ugliness is another is a nauseating sense of pretension and hypocrisy that is continually shoved down our throats to placate our growing rage.

It’s  Pelosi preening about how she “stands up for the little guy,” or represents “the most marginalized elements,” or is a “champion for the underdog.” It’s how she claims, “The American people voted to restore integrity and honesty in Washington, D.C., and the Democrats intend to lead the most honest, most open and most ethical Congress in history” while simultaneously conducting herself in secrecy. At the end of the day, she is ultimately full of crap, or cash, as it were.