If Secretan is correct, and I suspect he is, President Joe Biden is a terrible leader. And not just because of his inept handling of our withdrawal from Afghanistan, nor his decidedly immature response to blame his predecessor for his predicament, which is childish enough to merit a cynical response. No, Biden has failed on the most fundamental level: choosing to use personal tragedy to lecture rather than empathy to heal.

A gracious president would have said, “I hope I never forget his face or the face of others, because I, and I alone am responsible for their deaths. I am so sorry for your loss” and meant it sincerely! Instead, according to Schmitz, Biden took an almost defensive posture, remarking,  “I do know their stories.”

Even if that is true, even if Biden has a vast storehouse of easily recallable knowledge about these soldiers (doubtful given he often is confused about history, dates, or locations), this is not a gracious response, but rather indicative of a self-affirming narcissism. It didn’t open the heart, it didn’t inspire, and it sure as hell didn’t consider the needs of Mr. and Mrs. Schmitz. This supposedly august man who has walked the earth for nearly eight decades couldn’t even get the tone of his poorly constructed message right. As Schmitz put it, Biden “kind of — I described it as barking back, because I don’t know how else to really describe it.”

To make matters worse, Biden used the tragedy of this soldier’s death to turn the focus onto himself, talking about his son Beau Biden, who died of brain cancer in 2015. Mind you, here are parents whose lives have been cruelly, and unnecessarily turned upside down because of the thoughtlessness and ego of one man, and now that man decides to take this tragically sad moment and make it about himself.

To be sure, the President has had his share of personal tragedies, and sometimes sharing helps people bond and build rapport. But that’s not what happened here. Instead, Biden essentially hogged the stage. Schmitz put it bluntly: “He talked a bit more about his own son than he did my son, and that didn’t sit well with me.” Mr. Scmitz, it didn’t sit well with our country, either.

The reality is that Biden was given an opportunity to take responsibility in the aftermath of the international tragedy he authored. During the ceremony to honor the fallen heroes, President Biden was continually looking at his watch. Perhaps this was merely a coping mechanism to deal with the overwhelming reality confronting the President. But what it looked like was Biden thinking about what he was going to have for lunch, or counting the minutes to nap time. Whatever it was, it didn’t go over well.

“That didn’t happen just once. It happened on every single one that came out of that airplane. It happened on every single one of them. They would release the salute, and he would look down at his watch on every last one, all 13, he looked down at his watch. “As a father, seeing that and the disrespect, and hearing from his former leaders, one of [Taylor’s] master sergeants said … that this was avoidable — that they left them over there: They had them over there and let them down, and we can’t have that. It can’t happen ever again.” 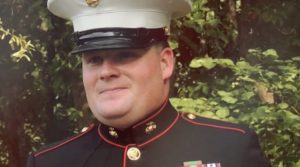 Staff Sgt. Darin T. Hoover
Source; militarytimes.comWe all make mistakes, sometimes grand and tragic mistakes, but what makes us whole again, what begins the process of redemption, is to take full responsibility, then seek to make amends in a meaningful manner. In other words, we get our hearts straight. President Biden, you have failed on all accounts, and the nation is waiting for a better you to emerge. Get your heart straight, sir.