Before the Delta variant swept across the United States, another Delta was holding reign: Delta 8 THC, a slightly less powerful cannabinoid than its sister, Delta 9 THC, the most dominant THC cannabinoid. Owing to a loophole in the 2018 Farm Bill that allowed CBD to be derived from hemp, the marijuana market quickly sprang into action and began cranking out a variety of distillates, edibles, and vape products all containing enough Delta 8 THC to impart a significant buzz.

But it was only a matter of time before the feds caught up with the underground THC outlaw. Because if there is one thing our federal government loves, it’s to use regulation to control the minutia of its citizens. So hefty is its appetite to lay down regulations, the Federal Register, a daily journal of federal government activity that includes presidential documents, proposed and final rules, and public notices, stands at 71,222 pages and is growing daily. Even Donald Trump, often heralded as the great deregulator, left office with 250 new rules enacted.

And on it rolls. As reported by Forbes magazine, “the federal Centers for Disease Control and Prevention and Food and Drug Administration published warnings advising the public of ‘serious health risks’  posed by Delta-8 THC products.” In case you don’t know, “serious health risk” is code for “we’re going to regulate the hell out of something,” in this case, Delta 8 THC.

Specifically, the FDA is concerned with a number of issues, chief among them being health concerns. According to the FDA website, “the FDA received adverse event reports from both consumers and law enforcement describing 22 patients who consumed delta-8 THC products; of these, 14 presented to a hospital or emergency room for treatment following the ingestion.” 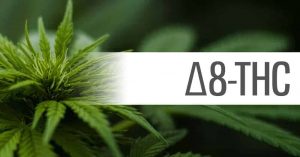 Delta 8 THC products have soared in popularity, prompting the FDA to issue warning statements
Source: lementearthcbd.comOf course, safety should be a priority, and a sensible set of regulations is a rational response. But the FDA is also concerned with how Delta 8 is being advertised for medical purposes, stating “Selling unapproved products with unsubstantiated therapeutic claims is not only a violation of federal law, but also can put consumers at risk, as these products have not been proven to be safe or effective.”

Fair enough, consumers want to know the score so to speak, and false advertising can be problematic. Still, it’s hard to imagine that most people who use Delta 8 are doing so because they believe in some inflated health claims, rather than using it as a legal substitute for the real McCoy, which is still a Schedule 1 substance by federal law, an irony lost only upon the federal government.

The FDA also wants to warn people that “delta-8 THC products likely expose consumers to much higher levels of the substance than are naturally occurring in hemp cannabis raw extracts. Thus, historical use of cannabis cannot be relied upon in establishing a level of safety for these products in humans.” While this is technically true because Delta 8 occurs in smaller amounts naturally than Delta 9 THC, some context is needed. To begin with, the concentration levels of Delta 9 THC have already been genetically manipulated to be much higher than was historically available.

According to weedblog.com, “prior to the 1990s THC potency of common strains was completely different from what it is today. In the 90s the THC levels of common marijuana strains were approximately 4%. Five years later, between 1995 and 2015, there was a 212% increase. A 2017 report showed a state dispensary’s popular strain known as “Girl Scout Cookie” to have medical weed THC levels between 17-28%.” Of course, THC inflation is probably at play, so these percentages are likely not entirely accurate.

Still, the National Institute on Drug Abuse reports that the average THC concentration of marijuana seizures is just above 14%, significantly more than 6.11% just 20 years ago, back in the dark ages of the dawn of the 21st century. My point is that these concentrations are much higher than they used to be, so the question is, “Why is any different for Delta 8 THC?.” but Much like Delta 9 THC products, as long as people are of age, they should make judicious decisions about how much they should consume, and taking THC concentration levels into account is a smart thing to do.

Moreover, the reality is that as potent as Delta 8 is, it still produces a milder high than most robust Delta THC 9 products. According to greenmarketreport.com, “ . . .if you genuinely want to get rid of the tension without experiencing the ‘high’ effect, Delta 8 THC might be a better option. It has a significantly milder effect when compared to Delta 9,” and “the feelings of relaxation gradually come on, and there is considerably less risk that it can induce anxiety.”

The FDA does have some genuine concerns about the quality of Delta 8 products. As they report, “Some manufacturers may use potentially unsafe household chemicals to make delta-8 THC through this chemical synthesis process. Additional chemicals may be used to change the color of the final product.” With harm reduction being a component of many marijuana users, this is an understandable concern. However, claims of adulteration may be exaggerated, and it’s possible that that the FDA’s concern is more of a pretext than context.

Another valid concern of the FDA is Delta 8 THC manufacturers’ targeting of children as well as the product’s widespread availability. As they argue, “Manufacturers are packaging and labeling these products in ways that may appeal to children (gummies, chocolates, cookies, candies, etc.)” and their ease of access,  “including convenience stores and gas stations, where there may not be age limits on who can purchase these products” is problematic. This is a valid issue. Minors should not have easy access to intoxicants.

The reality is that multiple states have already moved to regulate Delta TCH. As Forbes points out, “To date, 16 states have banned or restricted sales of Delta-8 products, including cannabis-friendly states like Colorado, Michigan, and Nevada. Bans in those states is motivated in part by complaints from the adult-use cannabis industry, which rightly views Delta-8 THC products as an existential threat.”

Part of the problem is the ubiquitous presence of Delta 8 THC products. They are simply everywhere, from CBD storefronts to vape shops, to gas stations, to online stores. As the Center for Disease Control (CDC) points out, “The rise in delta-8 THC products in marijuana and hemp marketplaces has increased the availability of psychoactive cannabis products, even in states, territories, and tribal nations where non-medical adult cannabis use is not permitted under law.”

While most of the concerns of the FDA are warranted, it really comes down to what type of regulation is being proposed. Laws that limit rogue companies and guarantee the quality of ingredients are welcome, as are regulations to keep Delta 8 THC products out of the hands of children. However, if the federal government moves to completely ban the sale of Delta 8 THC products by placing them on the controlled substances list, two things will happen.

One, Delta 8 manufacturers will likely be driven underground, which will only exacerbate the problems already cited by the FDA. Much like MDMA can be found in illegal pill form (Molly/Extasy), Delta 8 will probably follow suit. This will all but guarantee the manufacturing and distribution of Delta 8 THC products that are dubious in nature. The bottom line is that the illegality of marijuana did not stop its rise in popularity, and neither will making Delta 8 THC illegal.

Two, we likely see the rise of other THC products, thus touching off another round of the federal government trying to regulate the myriad of cannabinoid products available. As Forbes frames it, “. . . if the federal government adds Delta-8 to the Controlled Substances Act, the whole drama will play out yet again, a few years or months down the road, with yet another cannabis product not captured under the law.”

Meanwhile, Delta 8 THC sits in a very odd gray zone. Because it is derived from hemp, it is legal under the Farm Bill. Yet, it is in a class of tetrahydrocannabinols, which are illegal under federal law. To complicate matters, the DEA has placed Delta 8 THC on its so-called “orange list” of controlled substances. But, as Patrick Williams writes for Hemp Growers, “However, the federal code doesn’t specifically list delta-8 as a scheduled substance, and the law states that ‘Tetrahydrocannabinols does not include any material, compound, mixture, or preparation that falls within the definition of hemp ….’”

Moreover, Shane Pennington, counsel at Vicente Sederberg, told  Hemp Grower that the inclusion of delta-8 THC in the Orange Book “doesn’t make the cannabinoid a Schedule I substance or indicate that the DEA thinks it should be. Nor, if someone went to a court, would it have ‘the force and effect of law by itself.’”

Ultimately, this doesn’t have to be a complicated matter. It really all revolves around the federal government’s classification of marijuana in general as a controlled substance. As Fobes illuminates: “Looming over all of this, of course, is federal cannabis legalization. If the Delta-9 THC in marijuana was legal, demand for Delta-8 THC—a synthetic product, created to fulfill the market inefficiency posed by drug prohibition—would evaporate. If federal marijuana legalization happens, Delta-8 will be a nonfactor.”

But the federal register is a hungry beast, and it doesn’t like to be put on a diet.