There is an old South African proverb that goes, “Hope does not disappoint.” Although the proverb could be referring to many things of consequence, I believe the expression could easily be applied to the marijuana strain South Africa Kwazulu. Originally found on slopes of Drakensberg ridge in South Africa, South Africa Kwazulu is is a pure sativa strain, a rare phenomenon indeed.

As Cannabis Training University states, “A landrace strain is one of the varieties of marijuana strains that has pure genetics because it has not been diluted with other marijuana strains.” With a sweet and slightly spicy taste and floral undertones, South Africa Kwazulu has an enjoyable taste profile that is redolent of earthy goodness. It has medium-sized buds that are easy to grind and roll into a doobie, the most natural way to share ganja.

South Africa Kwazulu has a fascinating backstory. According to the Cannabis Directory, South Africa Kwazulu was grown “by generations of Shaka Zulus, who were one of Africa’s most significant farmer warrior tribes,” and “legend has it that this plant was used in the battle preparations prior to the first British attack in 1879 and that its long-lasting and galvanising properties enabled the outnumbered and outgunned Zulu army to repel the enemy invaders.”

And while you won’t likely need to repel any enemy invaders, South Africa Kwazulu certainly makes you feel whole and emotionally connected, thus potentially galvanizing friendships. Because South Africa Kwazulu is a pure sativa, it provides a clean, cerebral, uplifting buzz that is slightly euphoric without being overwhelming. And despite having a THC concentration that reaches 25%, its overall mellowness makes it an appealing and delightful selection for those that want a high without the accompanying paranoia.

I found the high relaxing, warm and friendly, like a warm comfortable blanket on a slightly chilly night. As one Allbud reviewer remarked, “I’ve been spoiled a few times and got South Africa Kwazulu  29%+; it’s a crazy high that somehow leaves you clear headed and full of energy.”

Now that you’ve got the spirit of the motherland in you, it’s time to nourish your body. And what better than the simple, delicious goodness of Fritos Lightly Salted Chips. Eschewing pretension, these chips are tasty on their own terms. Made with just corn, corn oil, and salt, Fritos are the original naked chip and have no preservatives, gluten, artificial flavors, or MSG. Their simple taste profile and saltines make a perfect snack for your inner Zulu. 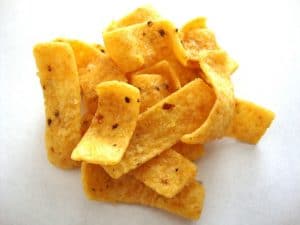 But underneath the surface of the music, Simon subtly attacks political issues, namely the beast of apartheid. However, Simon doesn’t overplay his hand with in-your-face politics. Rather than hitting you with the stick of reality, Simon chooses to tickle you with a feather instead. He is especially adept at creating both musical and philosophical resonance through the understated vocal component. As Rolling Stone magazine writes, “The unity of their voices expresses beauty, strength and endurance, despite the song’s grim subject. Simon’s goal is not to rouse further conflict over apartheid but to provide a hopeful tonic.”

One of the best songs is Diamonds in the Soles of Her Shoes, which makes extensive use of a traditional Sout African choir. And although the song takes on a lilting, upbeat sound, the lyrics speak of multiple and even dark meanings. It is at once a whimsical love song and an indicting commentary on the corruptive influence of the diamond trade in South Africa, an ugly dynamic that contributed to the perpetuation of apartheid.

Homeless is another standout track, with a lullaby-type energy that is soothing, yet thought-provoking as it explores how the struggles of homelessness also come with the magic of being one with nature. All in all, Simon’s Graceland is a treat for the ears and soul.

Until next time, remember, “A clever king is the brother of peace.” Peace be with you, brother.