Sour & Sweet, Then Stoned. That’s the wording the makers of Stoney Patch cannabis oil-infused gummies slapped at the top of their packaging to describe each “extra strength” 30-mg piece. And I can’t disagree with the statement. While they are not as sour and sweet as the bonafide Sour Patch Kids – who’s packaging lists “Sour, Then Sweet” – these THC treats get me stoned.

I was introduced to Stoney Patch gummies by a friend a few weeks ago and haven’t looked back. I’m a fan. While most of the 10mg gummies I’ve tried from varies dispensaries around the United States haven’t affected me, these 10 to a pack gummies do. For me, eating one is like smoking a couple of bowl hits, mixed with a little grogginess and cloudiness as a side effect.

These Stoney Patch cannabis treats don’t come without packaging controversy though. In July, Sour Patch products maker Mondelez Canada, who’s parent company is Mondelez International, waged a lawsuit against Stoney Patch, suing for trademark infringement. The catch here is that they can’t find the people behind the packaging, despite attempts to determine their identity through social media outlets.

There’s no denying that the Stoney Patch packaging closely resembles that of Mondelez’s Sour Patch products. Both packages are yellow and peppered with colorful puppet-like gummy figures. However, the “kids” on the Stoney Patch resealable packages are bloodshot cyclops surrounded by a patch of marijuana plants. Their bodies have pot leaves on them too. Stoney Patch also plays off of Sour Patch’s  flavor descriptions, as mentioned above. One major difference besides the obvious THC acronym on the Stoney Patch packs? The word “Kids” isn’t on the package. And – the fine print reads, “keep out of reach of children.”

It’s still not a good idea to leave these packages hanging around the house or in your kitchen snack cupboard. Lock them up if you have kids around the house. If my 45-year old roommate thought she was about to eat a package of Sour Patch Kids the other day, chances are your kid will too. 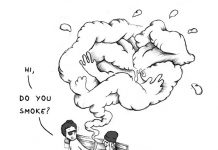 Virus Vaccine: Who gets the credit? Warp Speed?