On March 19, 1957, Elvis Aaron Presley purchased the property upon which he eventually built Graceland, which is now a mansion sitting on 13.8 acres in Memphis, Tennessee, which is now owned by his daughter, Lisa Marie Presley. A little more than 4 decades after Elvis’ demise, the final resting place of the “the king of rock and roll” has fallen from grace, utterly. In fact, with entrenched poverty and a soaring crime rate, Memphis may eventually be deserving of the name, Disgraceland.

A recent study by the Memphis city government uncovered these startling statistics:

To give these numbers some context, consider that the current poverty line for a family of four in the United States is $26,500. Given that the average cost of living in Memphis s $3,280/month, or $32,800/year, this means that nearly ⅓ of all adults earn several thousand less than the bare minimum needed to keep their heads above water. It also means that nearly ½ of all children in Memphis struggle with issues such as food security and access to clothing, medication, and other fundamentals needed for healthy living.

As a point of comparison, Memphis ranks number 2 in childhood poverty rate for cities with 1,000,000 or less residents, lagging only slightly behind the beleaguered city of New Orleans.

In The Urban Institute’s Data Book: The State of Children in Memphis and Shelby County, the authors state: “Families with children are particularly vulnerable to unaffordable housing: they earn less than other families, but need more space. When less income is left over after paying the rent, parents must make sacrifices that can reduce their children’s quality of life. Too often, these choices include cutting back on necessities like food, clothes, and healthcare.” 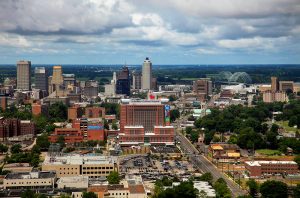 Downtown Memphis Source: city-data.comMemphis unfortunately has bragging rights to a cynical statistic: renter eviction. According to a report by apartmentlist.com, “Of the 50 largest metros in the nation, evictions are most prevalent in Memphis, with 6.1 percent of users reporting a prior eviction,” adding that “many households may qualify for assistance through programs such as Section 8, but, unfortunately, only a small share of those eligible for such benefits actually receive them, leaving the majority of low-income households struggling to pay rent.”

The picture gets even uglier when you start to disaggregate the data by race. The poverty rate for Black people in Memphis is over 40%, four times the poverty rate for White people. A recent report by Dr. Elena Delavega, PhD, of the University of Memphis exposes the depth of the problem, stating, “Minorities consistently suffer greater rates of poverty than non-Hispanic Whites in Memphis and Shelby County. The disparities observed in Shelby County are much larger than in the United States.”

Tamiko Woodall, a single mother and resident of Memphis, puts it in more personal terms: “It’s almost like a nightmare. I wake up. I go to sleep just thinking how am I gonna pay my bills. How am I gonna do this, make this happen?”

And though we seem to be turning the corner on the COVID-19 pandemic, its impact has been acutely felt by the working poor of Memphis. Tiffany Lowe, an employee at a Memphis Kentucky Fried Chicken store who participated in a strike to protest unsafe working conditions amid the COVID-19 outbreak in early April, has a child with an immune deficiency disorder, putting him at higher risk of hospitalization and death.

Lowe stated, “I’m frustrated, angry, and confused as to why a multi-billion dollar corporation such as KFC wouldn’t give us the things we need to survive like hazard pay, health care, and paid sick leave. I mean, if they want to call us essential employees, then they should make us feel essential, treat us like human beings, and give us what we deserve.”

Crime is a particularly pernicious issue in Memphis. A 2019 survey by powerpoll.com shows that “Memphis regularly lands close to the top of the annual ‘America’s-most-dangerous-city’ ranking. The city’s homicide rate was the third-highest in the country in 2018, according to FBI data. . .” The overall violent crime rate is more than 4 times the United States’ average, making Memphis a dangerous city. And despite a slight decrease in violent crime between 2018 and 2019, it appears crime is on the rise again in the Bluff City.

According to  Fox 13 Memphis, a report by the Tennessee Bureau of Investigation shows that “…violent crime rate went up almost a quarter at 24.3 percent in 2020 compared to the previous year. In Shelby County, the increase was 23.1 percent.” Bill Gibbons, president of the Memphis Shelby Crime Commission said, “When you break down the violent crime figures, it’s really the murders and aggravated assaults that have gone up.”

Such violence does not exist in a vacuum, but rather takes a significant toll on already stressed communities. Whether it’s lower property values, higher insurance premiums, or reluctance to invest in high-crime areas, there is a price beyond the immediate bloodshed. Robert J. Shapiro, author of the case study, The Economic Benefits of Reducing Violent Crime, frames it this way:

Violent crimes are costly. Murders, rapes, assaults, and robberies impose concrete economic costs on the victims who survive as well as the families of those who lose their lives, in the loss of earnings and their physical and emotional tolls.

From this perspective, poverty and crime are intimately (though not necessarily causally) linked, each exacerbating the negative effects of each other. And though it may be tempting to point fingers of accusations at the police or to decry elements of inequality, some Memphis residents are turning the camera on themselves and the communities where violence is problematic. Pastor Bill Adkins, a longtime activist in Memphis and senior pastor of Greater Imani Church had this to say about violence in Memphis:

To solve our problem, we’ve got to first be deeply concerned about it, We should make our feelings known. And we need to exhibit our anger when it comes to the crimes that take so many innocent lives. We become so easily angered about police brutality, which we should, but we should also be angered by the senseless murders, the homicides, the stray bullets that fly within our communities.

When Americans picture cities with big problem, we typically think of Detroit, St. Louis, Chicago, and Philadelphia, all which deserve our attention. But Memphis, known by many as the birthplace of both the blues and rock and roll, home of the   Stax Museum of American Soul Music, and the city where Martin Luther King, Jr. met his final demise, has a special place in the fabric of our country.. Aretha Franklin, Morgan Freeman, and Chris Garner all hail from Memphis.

Sun Records, a recording studio in Memphis, hosted the likes of Frank Otis Frost, Jerry Lee Lewis, and Johnny Cash. As songwriter, author, blues singer, record producer and digital marketing entrepreneur Shawn Amos puts it, “Many cities make music, but no city breathes music quite like Memphis. The songs and sounds that come from here are uniquely American.”

The dynamics of Memphis are a harbinger of things to come if we don’t pay attention to our distressed cities. To understand the plight of Memphis is to hold a mirror up to the collective soul of America. When we look at Memphis, we see ourselves, and our shared future. We all breathe the air of this “uniquely American city.” If Memphis falls from grace, we all do.