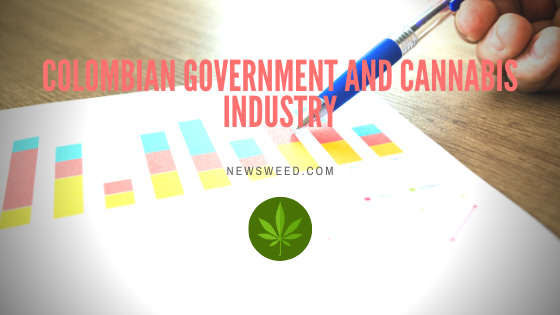 Are the measures taken by the Colombian government going to help the cannabis business? We don’t know that yet but the government is worried about all of the licenses that entrepreneurs are requesting for their cannabis businesses and the poor institution’s incapacity to react in front of that situation. The medicinal cannabis industry is growing fast in Colombia so the requests of those licenses is constantly growing and for that, institutions like the ICA and Invima have been doing big efforts to attend to it. From August 2017 to August 2018, they received 10 license requests per month and in the last year that number has tripled to 35 requests per month. These numbers are over what the Colombian institutions can attend to. Because of that, the government is creating a plan to attend to all requests in less time.

The Minister Uribe announced that he is going to add more hire qualified personnel like lawyers and pharmaceutical chemists, and with that, to reduce the analysis timing. He said that in his government, they approved 135 cannabis licenses, 6 per month, so they think that these processes need to be faster. But something more is happening in this situation. The minister announced that they passed the challenge of Jife (Junta Internacional de Fiscalización de Estupefacientes) as the entity to assign quotas to countries for production and distribution of these kinds of products.

Months ago, the Jife reduced quotas for Colombian producers to 1-2 tons. A very small amount for the growing local market but Uribe says that quotas are now available for 14 tons. But the aforementioned does not mean more exportation seeing that the exportation of cannabis product is in fact too small. The cannabis industry is growing and we hope that the government takes the necessary measures for going in the same way that its new business is growing. The government is working on another document required named Conpes. From this they are expecting to define the way to follow for the agroindustrial activities. The experts are expecting that the income will be better than banana or flower industries.

The flower industry produces millions of dollars for Colombia in the United States and Europe year after year, but the new agroindustrial activity (cannabis) is blooming from many greenhouses, warehouses and laboratories in Colombia. The majority of money is coming from Toronto Stock Exchange and accumulated capital from big rice, flowers and coffee entrepreneurs. The legal cannabis industry is taking the park from years ago after the promulgation of Law 1787 and 2016 when they were able to cultivate and manufacture products from this plant for medicinal products. This law was a big step for 20 to 30 businesses to make their own process to grow with their ideas. The objective for all those businesses is clear. They want to introduce themselves to the marijuana industry that can be valued in more than US$146.000 millions for. In fact, the big drink and food brands are seeing the activity and are eager to participate in it. Other companies in the consumer and pharmaceutical sector like Constellation Brands, Anheuser Busch InBev, Altria Group and Novartis are very interested in investments and associations with cannabis brands. It’s a public fact that 149 brands are listed on the Canadian stock exchange with values ​​around 50,000 million dollars.

The investment is not coming just from Toronto Stock Exchange. Last August, Constellation Brand, a big drink industry with products like Corona and Modelo beer, announced that they were improving their participation with US$4.000 millions in Canopy Growth (cannabis brand). A month before, Bloomberg says that Aurora Canopy (Canopy Growth’s competitor) was very close to Coca-Cola for the development of drinks with CBD, a component no-psychoactive from cannabis. Some business CEO thinks that the Stock Exchange is smart because they are betting to the team, the plan, the size and capacity; It is like the mining industry. They have a projection of capacity, how much they need to sell and more. The aforementioned can be true. Khiron is selling their products since last December with cosmetic products in retail like Farmatodo with the Kuida brand. Also, Khiron has a negotiation with Dixie Brand for a collaboration to distribute their Colombian products in Colorado and California. Khiron will begin distributing the Dixie Brand’s products in Latin America. The most important of these cannabis products is pet food and dog soothings, being the first time that a Colombian brand does that kind of exportation.

However, even when Toronto and New York Stock Exchange are sure about new green business, just one bank has available credit lines to “cannabicultores” in the country with a very difficult qualification process, and that bank is BBVA. The thing about this situation is because the reputation of the country, local banks with ADR titles from United States like Grupo Aval and Bancolombia, are scared about the United States federal government retaliations which maintain illegal all commerce and distribution of any type of cannabis. The president of Colombian Mercantil Stock Exchange is sure that these products will be distributed in the near future, but need to be justified with a big demand for the products. He invites us to remember that most of the huge fortunes of the United States were created from illegal products of their time like alcohol and tobacco.

In the last 20 years, Rionegro was a zone taken from ELN groups, but in a few decades, that changed a lot. Right now is the most complete and modern agro industrial complexes of Colombia for medicinal cannabis by PharmaCielo. The CEO says that in the beginning, when his Canadian partner proposed to work on medicinal cannabis, he said “no”, thinking about all the bad history that his country has around it and all the blood and violence that this caused. Right now he thinks that this is the best opportunity to change everything, to help indigenous and peasant communities have their participation in it and relieve the diseases of many.

Weed Across America – Know Before You Go (Part 1 of 3)