A couple of days ago, Latin America saw one of the most discriminatory and xenophobic acts in its modern history, as Chilean protesters marched against refugees in the city of Iquique, stole their belongings, and throw them to a fire pit.

The images of the protesters, holding Chilean flags and chanting xenophobic slogans, immediately became viral on social media, with millions of users repudiating the horrible scene. However, far from being a case without any type of background, the truth is that the beginning of this situation started a couple of years ago, with Chilean President Sebastian Piñera offering Venezuelan migrants the chance of migrating to Chile without too many inconveniences.

During the first years after this announcement, Chile was one of the most admired nations in Latin America because of their migration policies with Venezuelans. In fact, Chile became for most Venezuelan migrants and refugees the best place to go in South America, considering its solid economy and especially how easy it was for them to regulate their migratory status and get officially into the Chilean work system.

However, the Venezuelan crisis got worse, and more Venezuelan migrants and refugees went to Chile. This situation led to an inevitable change of policy that now forced all Venezuelans who wanted to go to Chile to apply for a special Visa that Chilean authorities needed to approve. While this reduced the number of Venezuelans entering the Andean nation for a couple of months, extreme poverty and desperation forced them to enter irregularly through the Bolivian border. 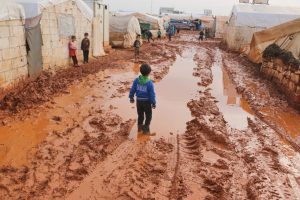 This way, many Venezuelan migrants and refugees stayed with no legal permission in the Chilean border city of Colchane, to then travel to the city of Iquique. Their plan was to stay in this city until they could get enough money to finally go to Santiago.

A hard reality in Iquique.

Considering the lack of response from local authorities and the fact that these Venezuelan refugees entered in an irregular manner, the situation went downhill in less than expected. After all, these Venezuelans were living in inhuman conditions and they weren’t able to get a regular job. This way, most of them decided with some Haitian and Colombian migrants to take one of the main squares of Iquique and install their own camp.

From that moment, many people in Iquique started to claim that criminality was going up, and that it was dangerous to walk around this square. Authorities didn’t do anything to solve this issue until Chilean military police Carabineros announced they were going to dismantle the refugee camp in the Iquique square.

The episode included some violent cases where some Venezuelan refugees fought against Carabineros, refusing to leave the square. However, the most problematic detail was the large number of Chileans who went there to insult the refugees with xenophobic slurs.

That same day, Twitter users started to plan an anti-immigration protest for the next day. It was a complete horror show that held almost 5,000 Chilean protesters, who marched to the square to call for an “end of the invasion”. Many of them held Chilean flags and posters with xenophobic slogans insulting refugees.

At one moment, a small group decided to make a fire pit next to the square, to then get into it and steal the belongings of the few Venezuelans that refused to leave the place, and throw them to the fire. The objects included Venezuelan passports and IDs, bicycles and child’s cradles.

It will only get worse.

Despite the widespread condemnation of these xenophobic acts, this seems to be the first episode of many others to come, considering that the reasons behind the Venezuelan refugee crisis remain intact. Moreover, most Latin American nations aren’t taking the proper migration policies to prevent Venezuelan migrants and refugees to live in these hard conditions.

So what happened in Iquique could be considered the canary in the coal mine.