NATO is quickly becoming obsolete. Both under President Trump, who actually labeled NATO as “obsolete” and now under President Biden, NATO is rapidly becoming a paper tiger, likely incapable of responding in the muscular, robust manner one would expect. By tying support for NATO to economic terms and conditions, Trump sent an unmistakable message: The United States is at odds with you.

And it didn’t go unnoticed by heads of European states. Here is an excerpt from a blog by David Hannay, a member of the House of Lords and former UK ambassador to the EU and UN:

“But the president linking Nato members’ levels of military spending to trade policy reaches a new degree of irresponsibility and risk. Nato’s outstanding success over its 70-year existence in providing security to its members without a shot being fired has depended crucially on the effectiveness of its deterrent capacity – specifically the commitment in Article 5 of the Nato treaty for each member to defend all others against aggressive action. By subjecting this to the transactional calculations of trade flows, Trump risks fatally undermining that deterrence. This point will not have escaped Nato’s adversaries.”

Beyond the stated commitment to its allies, known as “collective defence” under Article 5 of NATO’s founding treaty, this capacity to deter depends largely on a vibrant presence, everything from patrolling airspace, active maritime forces, and the proverbial “boots on the ground.” But a sober assessment of current NATO strength is disheartening. 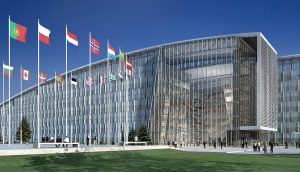 The NATO headquarters, Brussels, Belgium
Source: som.comPatrick Armstrong, a former analyst in the Canadian Department of National Defence argues that only on paper does NATO look prepared to handle confrontation, stating that they are “undermanned, under-equipped, seldom exercised, no logistics tail, no munitions production backup, no time for a long logistics build up. NATO’s armies aren’t capable of a major war against a first-class enemy.”

Of course, there are those who go further and feel NATO should rightly take its place in the ash heap of history. Writing for the New Eastern Outlook, Phil Butler argues: “Since its formation in 1949 this military alliance has only proven one thing, its ineffectiveness as either a peacekeeping force – its utter uselessness for the purpose it was instituted for. NATO nations spend 70% of the money spent on military and defense, and the organization has never won a war or deterred chaos. NATO is mostly a home for useless armchair warriors and a country club of unneeded bureaucrats.”

There are those that have a more nuanced, positive view of NATO’s future role in the world. David Sutton, a Research Analyst at the NATO Association of Canada, believes that NATO needs to be retooled and repurposed, not disposed of, arguing, “At the center of the World Economic Forum’s Global Risks for 2016 are unemployment and profound social instability. These two issues are strongly connected to what the forum listed as the greatest short-term threats: state collapse, large-scale involuntary immigration, and interstate conflict. As it stands, NATO is experienced and equipped to react to conventional security threats.”

Part of what Trump was getting at when he called NATO obsolete was centered around the concept of “opportunity cost.” Put simply, opportunity cost is the amount of potential gain an investor (think of the NATO members who contribute funds) misses out on when they commit to one investment choice over another. Under these parameters, Trump’s assertion was that we would be best off putting our energies, and of course, our monies elsewhere, because thye would have more vibrant returns (ie., deterrence and defense capabilities).

However, Khalid Mahdi, a Research Analyst and former Editor of the NATO’s Arc of Crisis program at the NATO Association of Canada believes NATO still plays a crucial role with regard to deescalating large-scale future conflicts, saying:

“A case in point is the recent flare-up between Russia and Turkey along the Turkish-Syrian border, which culminated in the downing of a Russian fighter jet by Turkish forces. Had efforts not been made to reassure or encourage restraint on the part of Turkish authorities, it is likely that the situation with Russia would have escalated further,” further adding “to view the Alliance’s utility from the standpoint of economic costs underestimates the multitude of challenges whose management will require NATO involvement.”

In any case, despite President Biden’s insistence that “America is back,” and contrary to his claim that “It’s overwhelmingly in the interest of the United States of America to have a great relationship with NATO and with the EU,” reality is settling in that this is far from the case. Due to his inept and highly consequential withdrawal from Afghanistan, Biden has actually exacerbated the strained relations with European nations that Trump initiated with his pronouncements about the relative value of NATO.

As Carl Bildt, Sweden’s former Prime Minister, told the BBC, “Expectations were very high when Joe Biden came in – probably too high, they were unrealistic. His ‘America is back’ suggested a golden age in our relations. But it didn’t happen and there’s been a shift in a fairly short period of time. The complete lack of consultations over the withdrawal has left a scar.”

Bildt is far from alone. Leaders from the UK, France, Latvia, and Spain all condemned the mostly unilateral move. Armin Laschet, Germany’s conservative candidate to succeed chancellor Angela Merkel, called the troop withdrawal “the greatest debacle that Nato has experienced since its foundation.”

These sentiments were echoed by Norbert Röttgen, chairman of the German parliament’s foreign relations committee who blasted Biden: “I say this with a heavy heart and with horror over what is happening, but the early withdrawal was a serious and far-reaching miscalculation by the current administration. This does fundamental damage to the political and moral credibility of the West.”

Laschet’s and Röttgen’s assessment of the West’s intervention in Afghanistan has resulted in stark negativity that is consuming the worldview of nations such as Germany. A recent left-leaning German press statement captured this zeitgeist: “With the defeat of western imperialism in Afghanistan, the interventionalist policy of NATO has failed dramatically.” Or, as Bildt put it, “Expectations for a revival of the transatlantic relationship have been deflated. And one is resigned to an America that does it its own way.”

None of this is lost upon hardline advocates for advocates of worldwide socialism, and their perspective bears thoughtful analysis. Writing for the World Socialist Website, Bill Van Auken has declared, “Far from deterring the growth of American militarism, the debacles produced by the “war on terrorism” have only paved the way to the shift of US global strategy to ‘great power conflict,’ in the first instance, confrontation with nuclear-armed China and Russia. The withdrawal from Afghanistan was carried out not to end America’s longest war, but rather to shift the Pentagon’s resources to the South China Sea, Eastern Europe and the Baltic.”

With Afghanistan solidly in the hands of the Taliban, NATO scrambling to find a new identity and future, Korea apparently rebuilding its nuclear program, and China flexing its global muscles, we will need a sober, skillful, and fully engaged leader to navigate our way through these potentially perilous and dangerous times. If Afghanistan is any indicator, then the obsolescence of NATO may be just the beginning of the ensuing darkness that threatens to consume the free world.